Dana Andrews gets his due

As any reader of this blog knows, I love classic movies. I have many favorite actors and actresses from Hollywood’s Golden Age, but my favorite actor from this time period is Dana Andrews. As a kid growing up, I used to watch a lot of old movies on TV (before cable and TCM). When I discovered the films of Andrews (Laura, Fallen Angel, The Best Years of Our Lives), I was fascinated by his naturalistic acting style, one without artifice or exaggerated emotions and mannerisms.

Through my blog, I became acquainted with Andrews biographer, Carl Rollyson. Rollyson wrote the first comprehensive biography of the actor, receiving cooperation from the Andrews family. The book inspired me to organize a Dana Andrews blogathon with my fellow classic movie bloggers. It was a huge success. So successful was the blogathon that I decided to propose a class on Andrews. This spring I’ll be teaching Dana Andrews: Hollywood Enigma at Facets Film School, 1517 W. Fullerton Ave, Chicago, IL. If you’re in Chicago and you love classic movies, I encourage you to take this class. 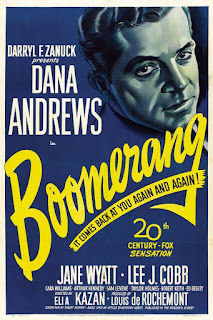 Dana Andrews (1909-1992) was one of Hollywood’s most popular movie stars during its golden age. He worked with many legendary, accomplished directors including John Ford, Lewis Milestone, Otto Preminger, Fritz Lang, and William Wyler to name just a few. Andrews’s career is a true American rags-to-riches story as he was the third of 13 children born to a Baptist minister and his wife, yet rose to become a movie star. His minimalist acting style personified ‘the male’ mask of the 1940s, in such classic films as Laura, Fallen Angel, and Where the Sidewalk Ends, in which he played the ‘masculine ideal of sang froid impassivity. These singular films, all directed by Preminger, recognized this distinguishing characteristic of Andrews’s acting ability and perhaps exploited it best. Although Andrews fulfilled his dreams, he did not live the typical celebrity lifestyle. A family man at heart, Andrews avoided the limelight that many of his contemporaries fully embraced. A complicated man, he had a problem with alcohol for most of his adult life, but despite his personal conflicts, he was admired and well liked by his colleagues, leaving us with an extraordinary body of work that will be studied for generations to come.

Posted by Stephen Reginald at 6:51 PM