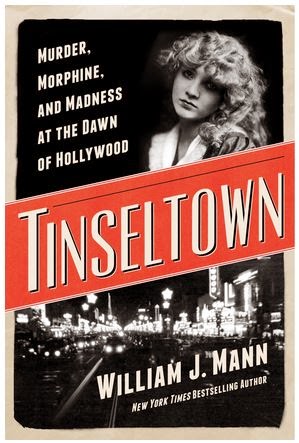 Tinseltown: Murder, Morphin, and Madness At The Dawn Of Hollywood,  William J. Mann’s latest nonfiction work centers around the unsolved murder of William Desmond Taylor, a popular director and president of the Motion Picture Directors Association. Taylor was murdered in his home on February 1, 1922. His murder has gone unsolved for more than 90 years, but Mann thinks he knows who did the deed and why.

Taylor was a popular player in the early days of the motion picture industry. He directed 59 silent films between 1914 and 1922. He also acted in 27 films between 1913 and 1915. He directed the legendary Mary Pickford as well as Mary Miles Minter, a serious rival to Pickford, in the silent version of Anne of Green Gables. Taylor was widely respected and beloved by many in the movie business, but he had his secrets. Did these secrets have something to do with his murder?

During the time of Taylor’s murder, the movie industry was under attack by reformers to clean up its act. Many believed that Hollywood was corrupting the youth of America and early movie moguls like Adolph Zukor and Marcus Loew feared their empires were in danger. There was talk of censorship and government regulation which no one in the movie business wanted.

With the growing success of the movie business and its stars came a lot of press scrutiny—the public loved a good scandal—and Hollywood during the 1920s seemed more than happy to oblige. Top stars like Mabel Normand and Wallace Reid had drug problems. Normand was able to beat hers, but Reid, who was addicted to morphine after he suffered a work-related injury, wasn’t so lucky. Then there was the Roscoe “Fatty” Arbuckle scandal. Arbuckle a top star at the Famous Players studio, was accused of rape and murder. Although Arbuckle was acquitted with the jury saying that the actor suffered a great injustice, the reformers and church ladies organized boycotts of Arbuckle’s (they would eventually boycott Normand’s films as well) films. The public was willing to forgive Arbuckle—they loved his movies—but Zukor, head of Famous Players, decided to cut his loses and release Arbuckle from his contract.

Taylor was a great friend of Normand and the two were rumored to be an item, but their relationship was strictly platonic. Normand was the last person to see Taylor before he was murdered and was an early suspect. Other suspects, included Minter, Charlotte Shelby (Minter’s mother), Edward Sands, Taylor’s valet who was recently fired, and Henry Peavey, Taylor’s new valet and the one who discovered the body.

The murder negatively affected the careers of Normand and Minter, both major stars during the silent era. Minter’s career basically came to an end after the murder. Zukor afraid of outrage and boycotts from the reformers didn’t renew Minter’s contract. She never worked in films again. Normand survived, but she never enjoyed the success she had before Taylor’s murder. Before Normand died of tuberculosis at the age of thirty-seven, she supposedly said “I do hate to go without knowing what happened to poor Billy Taylor.”

Mann’s book has been compared to The Devil In The White City because of its similar narrative style, reading more like a novel than a work of nonfiction. Mann weaves a fascinating tale of early Hollywood and the scandals that almost destroyed the movie business. It’s to Mann’s credit that he doesn’t wallow in the details of the various scandals, but instead focuses on the possible motivations of the individuals involved. I came away feeling that I knew Mabel Normand, Mary Miles Minter, Adolph Zukor, Marcus Lowe, and William Desmond Taylor, so good were Mann’s descriptions of the major players.

Tinseltown is a great read and a must for movie buffs and film historians.

Tinseltown’s publication date is October 14, 2014, but can be pre-ordered at Amazon.

Posted by Stephen Reginald at 8:05 PM