Hitchcock’s “Shadow of a Doubt” to screen October 14, 2014 at Daystar Center 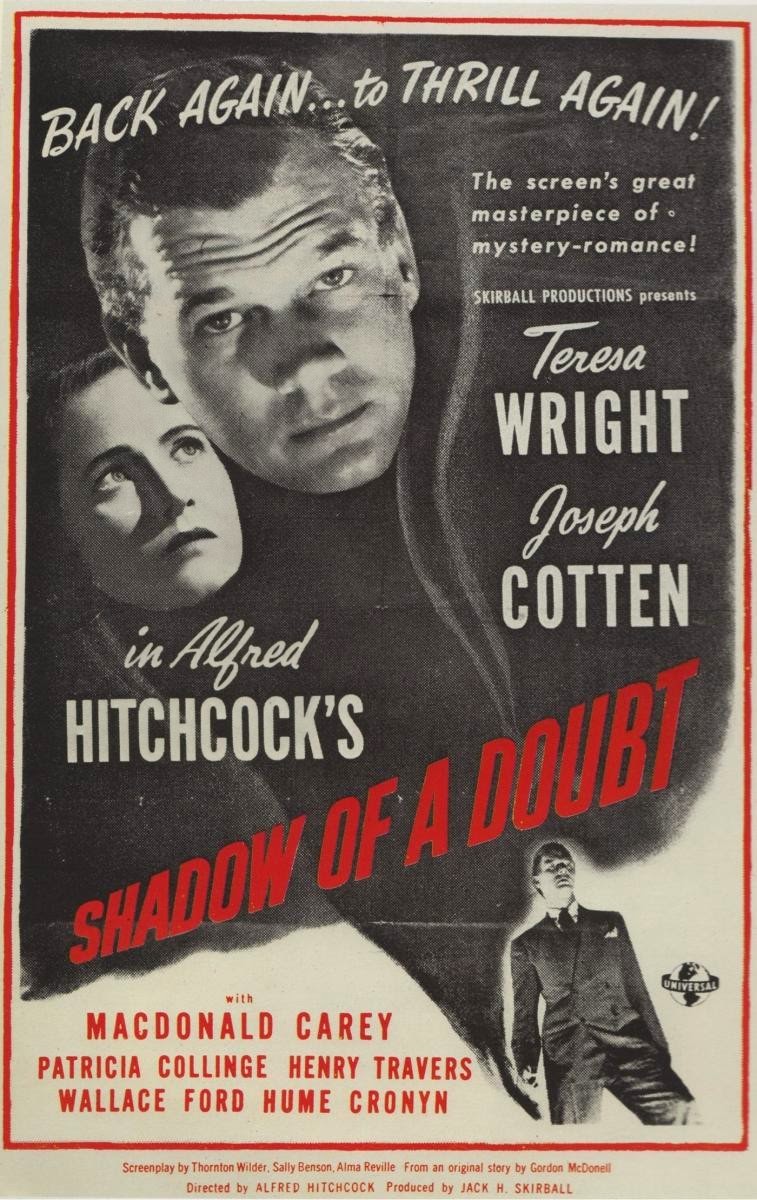 A Personal Favorite
Considered Alfred Hitchcock’s personal favorite of all his films, Shadow of a Doubt (1943), is also the only film he ever shot entirely on location. Hitchcock picked Santa Rosa, CA, because it exemplified, at least it did in 1942, the ideal American town. Film critic Bosley Crowther said in his review of the film, “The flavor and ‘feel’ of a small town has been beautifully impressed in this film by the simple expedient of shooting most of it in Santa Rosa, Calif.”

No Prima Donnas
One of the reasons Shadow of a Doubt was Hitchcock’s favorite was due to the cast. Teresa Wright and Joseph Cotton, although movie stars, weren’t prima donnas. The director was impressed with Wright’s professionalism and preparation for her role. Cotton thought Hitchcock was one of the easiest directors he ever worked with. The two hit it off from the start and remained great friends for the rest of their lives. The rest of the supporting cast, Henry Travers, Patricia Collinge, Hume Cronyn, and MacDonald Carey were all pros, with Cronyn, prior to this film, a stage actor, making his movie debut in Shadow of a Doubt. He too, along with his wife, Jessica Tandy (Tandy would  appear in The Birds some 20 years later.) remained friends with Hitchcock for the rest of his lives.

Idolizing Uncle Charlie
When Uncle Charlie (Joseph Cotton) travels west to visit his sister and her family, the sleepy town of Santa Rosa is never the same. Handsome and debonair, Uncle Charlie is idolized by his young niece Charlene “Charlie” Newton (Teresa Wright) who has become disenchanted with her small-town life. Uncle Charlie represents glamour and excitement to young Charlie and she craves his attention.

Word of Mouth
As word spreads about a man they call the Merry Widow murderer, Charley suspects that he and her beloved uncle to be one in the same. But when a government agent investigating the case befriends her, Charley is faced with some tough choices. Does she cooperate, putting her uncle at risk, and upsetting her mother? By getting closer to her uncle, does she put her own life in jeopardy?

Where Evil Lurks
With the help of playwright Thorton Wilder (Our Town) and screenwriter Sally Benson (Meet Me in St. Louis), Hitchcock created a truly suspenseful film. Shadow of a Doubt demonstrates one of Hitchcock’s favorite themes: evil can lurk in the most unlikely and innocent of places…within our own towns or cities and in the midst our own families.


Backstory: Teresa Wright was nominated for Academy Awards for her first three film roles. It’s a record that stands to this day. She won for her performance in Mrs. Miniver (Best Supporting Actress). Shadow of a Doubt was only her fourth film where she was top billed. Wright was a legitimate stage actress, understudying for Martha Scott who was the original Emily in Thornton Wilder’s Our Town. She originated the role of Mary Skinner in the Broadway production of Life With Father, the role Elizabeth Taylor played on the screen.
Posted by Stephen Reginald at 6:00 AM