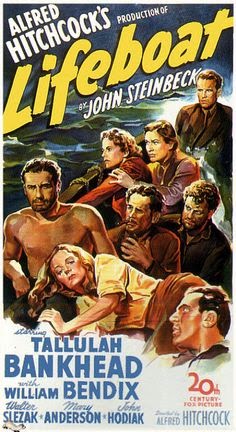 A director’s challenge
Alfred Hitchcock loved challenges. He embraced new cinematic techniques (and probably invented or at least perfected a few) and was intrigued with the idea of filming a story in a limited setting. Lifeboat, as the title might suggest, takes place entirely in a lifeboat. In the hands of a lesser director, Lifeboat would be unbearable, but in the hands of the master, it’s compelling cinema.

Will they survive
After their ship is sunk by a German U-boat during WWII, a group of British and American citizens struggle to survive in a cramped lifeboat. When a German survivor is pulled aboard, against the wishes of some of the survivors, the tension begins. Is he a German officer? Is he helping them survive or does he have ulterior motives? Can the nine people band together until help comes?

Join the Chicago Film club; join the discussion
fans. Once a month we screen a classic film and have a brief discussion afterward. For more information, including how to join (it’s free), click here. To purchase your ticket in advance, click here. The Venue 1550 is easily accessible by the CTA. Please visit Transit Chicago for more information on transportation options.

Backstory: As the film’s star, Bankhead received a salary of $75,000 ($1,013,513 today). She reportedly refused to wear undergarments, which caused quite a sensation on the set. Both Bankhead and Anderson became ill during filming. Bankhead came down with pneumonia twice. Other than during the opening and closing credits, there is no music during the movie. This was Hitchcock’s only film made at Twentieth Century-Fox. He was supposed to make another film at Fox after Lifeboat, but that never happened.
Posted by Stephen Reginald at 7:41 AM