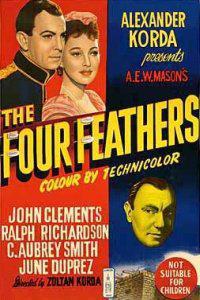 The Four Feathers (1939) was the third movie version of the A. E. W. Mason novel and considered the best of the bunch. Produced by Alexander Korda and directed by brother Zoltan, The Four Feathers is an epic production, filmed in Technicolor when the process was still a bit of a novelty. Like Gunga Din (1939), it portrays the British Empire, during the late 19th century. As an adventure and melodrama, The Four Feathers is hard to beat.

The plot revolves around Harry Faversham’s decision not to follow in the family tradition of serving in the army. He very dramatically resigns his post on the eve of his regiment’s journey to the Sudan. Their mission: To recapture Khartoum, the capital and second largest city in Sudan. Branded a coward by friends —the white feathers given to Harry by his comrades are emblems of cowardice—, and his fiancée played by the lovely June Duprez. As a result, Harry becomes a tormented soul.

In an attempt at redemption, he disguises himself as an Arab to rescue his friends, who are imprisoned by Egyptian rebels, and prove that he isn’t a coward. A good story supported by a superior production, The Four Feathers holds up remarkably well. The on-location color cinematography is remarkable. The spectacle of the battle scenes, combined with the dazzling red uniforms of the British soldiers, make for a powerful epic. The New York Times was impressed with the film, calling it “explosively cinematic” and overwhelmed by the “sheer weight of size and width of camera field.”

Posted by Stephen Reginald at 7:12 PM