Preston Sturges series: Screening of “Christmas in July” April 26 at the Daystar Center 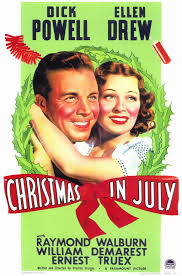 Christmas in July (1940) was Preston Sturges’s second film as writer/director, based on his play, A Cup of Coffee (1931). The movie stars Dick Powell, Ellen Drew, and the growing Sturges stock company of supporting players.

Dr. Maxford, the head of Maxford House Coffee is anxious to announce the winner of a slogan contest for his popular brew. Unfortunately for Maxford, the jury is deadlocked by the bull-headed Mr. Bildocker (William Demarest). The contest winner was supposed to be announced on national radio, but because of the deadlock, no winner is announced.

Jimmy MacDonald (Powell) dreams of winning the contest to prove to himself and his girlfriend Betty Casey (Drew) that he has the talent to make it big in the advertising business. He also wants to provide for his mother (Georgia Caine). No one gets Jimmy’s slogan: “If you can’t sleep at night, it’s not the coffee, it’s the bunk.”

As a joke, three of Jimmy’s coworkers create a fake telegram announcing him as the winner. The joke gets completely out of hand. Jimmy’s boss gives him a promotion, a raise, his own office, and a private secretary (Betty). It isn’t long before the jig is up, but not before Jimmy has bought gifts for his mother, girlfriend, and just about everyone in his neighborhood. When the manager of Shindel’s department store comes to repossess his merchandise, it is revealed that Jimmy didn’t win the contest after all.


Will all of Jimmy’s career dreams be dashed? Will he still be able to win Betty’s heart? Will their Christmas in July have a happy ending?


Daystar Center located at 1550 S. State St. works through a grassroots network of collaborations and partnerships with individuals and other nonprofit organizations. Through this web, they’re able to provide educational, cultural, and civic activities that enrich and empower their clients, guests, and community members. To learn more about classes and events offered at the Daystar Center, please visit their Web site.
Posted by Stephen Reginald at 8:51 PM