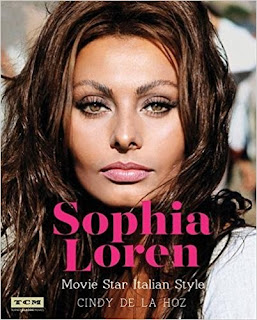 Like Ava: A Life in Movies by Kendra Bean and Anthony Uzarowski, Sophia Loren: Movie Star Italian Style by Cindy De La Hoz is a pictorial biography. While we learn a lot about the famous international star, it’s the pictures that really take center stage; the biography is filled with gorgeous images on almost every page.

Sophia Loren was born out of wedlock to Romilda Villani, a concert pianist and Riccardo Scicolone, a man with “a distant nobel lineage.” Villani hoped Scicolone would marry her (she had another daughter by him, Maria), but that wasn’t to be. As a teenager, Villani won a Greta Garbo look-alike contest sponsored by Metro-Goldwyn-Mayer. Unfortunately, Villani’s parents wouldn’t allow their daughter to travel to the United States. Villani’s Hollywood dreams may have been dashed, but she invested all her energy into her eldest daughter “Sofia.”


Sophia started her career as an extra in Italian films after World War II. She and her mother were among the thousands of extras used for the 1951 epic Quo Vadis starring Robert Taylor and Deborah Kerr. Before too long, she was appearing in minor roles in Italian films, slowly developing a reputation in Italy. Sophia appeared in all kinds of movies in Italy, but in 1954 she had the good fortune to work with Vittorio De Sica on the The Gold of Naples. De Sica was a respected actor and director and their collaborations on screen would further both their careers. The Gold of Naples made Sophia a star in Italy and Europe; she was the toast of the 1955 Cannes Film Festival.

Sophia’s career really took off when she went to Hollywood in 1957. Americans first got to see Sophia in Boy on a Dolphin, although the first American movie she worked on was The Pride and the Passion co-starring Cary Grant and Frank Sinatra. Boy on a Dolphin, filmed on location in Greece, was released first. Sophia starred alongside Alan Ladd and Clifton Webb in the colorful adventure tale directed by Hollywood veteran Jean Negulesco. Negulesco went on say “[Sophia] has, without a doubt, the most extraordinary talent I have ever met.”

As a film fan, I really like the way the book features all of Sophia’s movies chronologically with movie stills, film posters, as well as on-the-set images. It’s a great way to revisit the film icon’s career and relive some of the great movies she was a part of. My favorite Sophia Loren movie is Houseboat (1958). It made a big impression on me as a child and it has stayed with me every since. Sophia’s charm and personality really come through. Plus it doesn’t hurt that her costar is Cary Grant. As an Italian socialite trying to escape the tight grip of her father, Sophia’s character (Cinzia) gets a job as a nanny to widower Grant’s three young children. Sophia is a natural with the kids and everyone looks like they’re having a ball. As biographer Ms. De La Hoz says, it “is a delight from start to finish.”


If you’re a movie or Sophia Loren fan, you’re sure to enjoy Sophia: Movie Star Italian Style. If you put this book on your coffee table alongside Ava: A Life in Movies, your guests will never leave!