Meet John Doe (1941) is the tale of Ann Mitchell (Barbara Stanwyck) a newspaper journalist. On the eve of her firing by a new owner, she stages a risky publicity stunt in order to negotiate to get her job back. In her last column, she creates a poor, unemployed character named John Doe who plans on jumping to his death from the roof of City Hall on Christmas Eve in order to protest the ills of society. The column catches the imagination of the newspaper’s readers so there is a mad scramble by the new publisher (James Gleason) to find a “real” John Doe to keep the story—and newspaper sales—going. Ann and the newspaper go on a search for someone who can play John Doe. They find a down-on-his luck former baseball pitcher (Gary Cooper) who is all too willing to go along with the game if he will receive medical treatment for his injured pitching arm. Ann’s columns make John Doe so popular that clubs in his name form across the country. All this publicity gets the attention of the newspaper’s corrupt publisher D. B. Norton (Edward Arnold). Norton has political aspirations and tries to use the John Doe clubs to promote his own interests. Will he succeed in manipulating John Doe? Or will John Doe end the movement with a jump from City Hall? Frank Capra directed this classic whose exploration of corruption and redemption still resonate with audiences 76 years after its initial release. The great supporting class also includes Walter Brennan (Sergeant York), Spring Byington (The Devil and Miss Jones), and Gene Lockhart (Miracle on 34th Street).

This is part of the “Stanwyck on State Street” series. 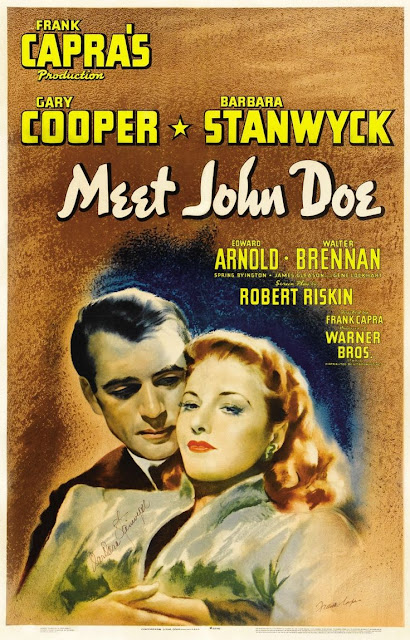 
Stephen Reginald is a freelance writer and editor. He has worked at various positions within the publishing industry for over 25 years. Most recently he was executive editor for McGraw-Hill’s The Learning Group Division. A long-time amateur student of film, Reginald hosts “Chicago Film Club,” a monthly movie event held in the South Loop, for the past two years. Reginald has also taught several adult education film classes at Facets Film School, Chicago.
Posted by Stephen Reginald at 4:31 PM