Sorry, Wrong Number (1948) is based on a popular radio play—one of the most popular radio plays of all time—that stars Barbara Stanwyck as Leona Stevenson, a spoiled, rich, bedridden woman who accidentally overhears a plot to murder an unidentified woman. In her attempt to report the incident to the police, Stanwyck begins to suspect that it is her husband (Burt Lancaster) who wants her murdered. The role of Leona was a tour-de-force for Stanwyck, earning her an Academy Award nomination—her fourth—for Best Actress. 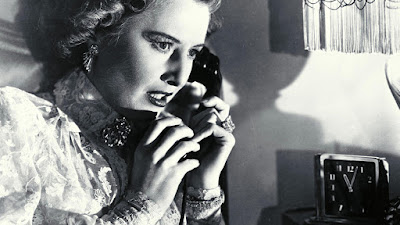 Have some Joe and Enjoy the Show!
Before the movie, grab a cup of coffee from Overflow Coffee Bar, located within the Daystar Center. You can bring food and beverages into room 102.

Stephen Reginald is a freelance writer and editor. He has worked at various positions within the publishing industry for over 25 years. Most recently he was executive editor for McGraw-Hill’s The Learning Group Division. A long-time amateur student of film, Reginald hosts “Chicago Film Club,” a monthly movie event held in the South Loop, for the past two years. Reginald has also taught several adult education film classes at Facets Film School, Chicago.
Posted by Stephen Reginald at 12:42 PM