Roma written and directed by Alfonso Cuaron (Gravity) has received almost universal acclaim and is considered a front-runner for the Best Picture Academy Award this year. Set in 1970 and 1971 and filmed in black and white, it’s a semi-autobiographical telling of Cuaron’s life growing up in Mexico City. The film centers on the life of Cleo, a live-in housekeeper to a middle-class family.

During her time off, Cleo and her boyfriend Fermin rent a room instead of seeing a movie with fellow live-in maid Adela and her boyfriend. In their rented room, Fermin shows off his martial arts skills using a curtain rod (naked, which is totally gratuitous). It’s an odd scene, but a clue that all is not right with Fermin and this relationship. 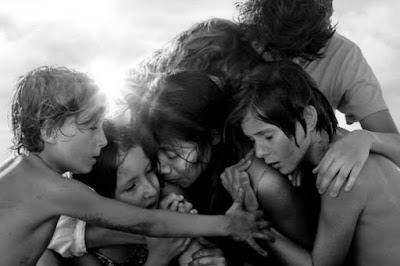 What happens next is a series of (inevitable) events that make the film seem more like a documentary than a drama. There is no attempt at character development. Cleo, as a character is likeable enough, but we never really get to know her outside of her tasks as a maid and nanny.

But the film’s biggest crime, in my opinion, is that it’s boring. I forced myself to sit through the entire 135 minutes. I kept hoping that something would happen to reward my endurance, but I was disappointed.

Roma is the type of film that critics love, but that few people would pay money to see. The film distributed by Netflix had a brief release so it could qualify for the Oscars. It’s been available on Netflix for several months.

Posted by Stephen Reginald at 7:03 PM