Christmas Holiday (1944) is a film noir directed by Robert Siodmak and starring Deanna Durbin and Gene Kelly. Audiences in 1944 might have thought they were going to see a light musical, considering the talent involved, but it’s a heavy drama with both Durbin and Kelly playing against type. 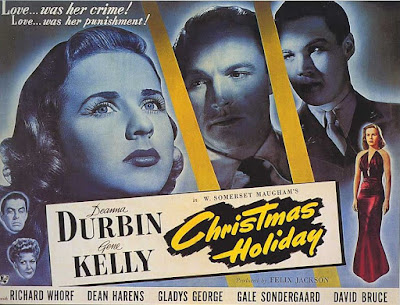 This was Durbin’s biggest box office success up to that time and Universal’s biggest hit of the year, but it’s practically forgotten today. The film has an interesting pedigree. It’s based on a novel by W. Somerset Maugham, with a screenplay by Herman J. Mankiewicz (Citizen Kane). The cinematographer was Woody Bredell (The Killers, The Inspector General). It had an Academy Award-nominated film score by Hans J. Salter (The Reckless Moment), and a new song, “Spring Will Be a Little Late This Year” by Frank Loesser.

Like Judy Garland, Durbin had grown up on film. At 15, Durbin starred in Three Smart Girls (1936) and became an overnight sensation. She had the vocal range of a legitimate lyric soprano. Durbin had considered a career in opera, but the movies changed all that. In 1938, she was awarded the Academy Juvenile Award. Durbin starred in a string of box office hits where she was the wholesome heroine with the beautiful singing voice. In almost all of her features, Durbin would sing a famous opera aria. As she matured, Durbin wanted to tackle more adult roles. Durbin was 23 when Christmas Holiday was released. Critics weren’t too sure the role was right for Durbin, but director Siodmak thought she was a “real actress” and had confidence that she was up to playing the abused wife of a small-time criminal (Kelly).
Kelly was brought to Hollywood and put under contract by M-G-M based on his performance in Pal Joey on Broadway. The same year that Christmas Holiday was released, Kelly, on loan to Columbia, starred with Rita Hayworth in the Technicolor musical Cover Girl. With Durbin and Kelly in the same picture, movie fans surely expected a musical or light comedy, but instead, they were drawn into a complicated drama set during the Christmas holiday.

In spite of the critics “bothered” that wholesome Durbin was playing a woman of questionable character, audiences ate it up. It was a huge commercial success. Based on the film’s bx office, Durbin was signed to a new exclusive six-year contract.


Posted by Stephen Reginald at 9:04 PM