To Catch a Thief (1955) is a romantic thriller directed by Alfred Hitchcock and starring Cary Grant and Grace Kelly. John Michael Hayes wrote the screenplay and the cinematography was by long-time Hitchcock associate, Robert Burks.

On the French Riviera, there is a rash of jewel robberies that have all the earmarks of former jewel thief John “The Cat” Robie (Grant). Robie has remained straight since his parole following his work in the French Resistance during World War II. Parole was contingent on Robie staying clean, but these new robberies have put his freedom in jeopardy.

Enter Jessie and Frances (Francie) Stevens, a nouveau riche widow (Jesse Royce Landis) traveling with her daughter (Kelly). Robie believes that he can clear himself if he can find the real thief, pretending to be a businessman. Francie sees through Robie’s cover. When her mother’s jewels are stolen, Francie is determined to expose Robie as “The Cat.”

John Michael Hayes (1919 – 2008) was an American screenwriter who wrote four screenplays for Hitchcock: Rear Window (1954), To Catch a Thief (1955), The Trouble with Harry (1955), and The Man Who Knew Too Much (1956). Hayes was born in Worcester, Massachusetts. As a boy, he missed a lot of school because of ear infections. During his time at home, he acquired a love of reading and writing. As a young adult, he got jobs writing for local periodicals. He eventually got a job with the Associated Press and attended Massachusetts State College. After serving in the US Army during World War II, Hayes moved to California and began writing scripts for the radio. Hayes parlayed his radio scripting into a job writing screenplays in Hollywood. He worked on the scripts for big-budget films like Peyton Place (1957), BUtterfield 8 (1960), The Carpetbaggers (1964), and Nevada Smith (1966).

Cary Grant (1904 – 1986) was an English-born American actor who became one of the most popular leading men in film history. Grant started his career in vaudeville before heading to Hollywood. He became a superstar in the late 1930s in a series of screwball comedies including The Awful Truth (1937) with Irene Dunne. He was a memorable C. K. Dexter Haven in The Philadelphia Story (1940) opposite Katharine Hepburn and James Stewart. He received two Best Actor nominations: Penny Serenade (1941) and None but the Lonely Hearts (1944). Other classic Grant films include Gunga Din (1939), Only Angels Have Wings (1939), and Arsenic and Old Lace (1944). He made for popular films with Alfred Hitchcock: Suspicion (1941), Notorious (1946), To Catch a Thief (1955), and North by Northwest (1959). He was presented with an Honorary Oscar at the 42nd Academy Awards in 1970.

Grace Kelly (1929 – 1982) was an American film actress who after a fairly brief Hollywood career became the Princess of Monaco by marrying Prince Rainier III in 1956. Kelly appeared in theater productions in New York City and on live television during the early 1950s. For her role in Mogambo (1953), Kelly was nominated for a Best Supporting Actress Oscar. She lost the Oscar but became a major star with lead roles in five films released in 1954: Dial M for Murder, Rear Window, The Country Girl, Green Fire, and The Bridges of Toko-Ri. She would make only three more movies—To Catch a Thief, The Swan (1955), and High Society (1956)—before retiring from films. 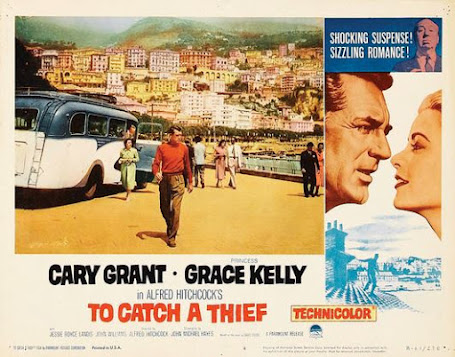 To Catch a Thief Trivia:

To watch the film, click on the YouTube link below. Be sure to use this link because it is the best print on the channel.

Topic: Discussion of "To Catch a Thief"

Posted by Stephen Reginald at 1:29 PM