Notorious (1946) is a film noir/spy thriller directed by Alfred Hitchcock and starring Cary Grant, Ingrid Bergman, and Claude Raines. The film’s screenplay was written by Ben Hecht (Nothing Sacred) with cinematography by Ted Tetzlaff (My Man Godfrey).

Alicia Huberman (Bergman) is recruited by the American government to infiltrate a group of Nazis hiding out in Brazil after World War II. Alicia’s father was a convicted Nazi spy who committed suicide in prison. Government agent T. R. Devlin (Grant) recruits Alicia and informs her of her assignment. Part of her assignment is romancing the head of the Nazi group in Brazil, Alexander Sebastian (Raines), a man she had a relationship with in the past.

Things get complicated when Devlin and Alicia fall in love and the Nazi plot becomes more elusive. Will Devlin and Alicia be successful in exposing the Nazis? Will they be able to find happiness once their assignment is over?

Ben Hecht (1894 – 1964) was an American screenwriter, director, producer, playwright, journalist, and novelist! Hecht was born in New York City but went to Chicago at age 16. He became a journalist of some note and in 1920 he co-wrote The Front Page which became a huge Broadway hit. In the 1930s and 1940s, Hecht was one of the most popular and prolific screenwriters in Hollywood. He often acted as a “script doctor” for many screenplays, often without credit. Some of Hecht’s famous screenplays include Spellbound (1945), Kiss of Death (1947), Design for Living (1933), Wuthering Heights (1939), and Gunga Din (1939). Hecht was one of the dozens of writers who had a hand in the Gone With the Wind (1939) screenplay. Supposedly, Hecht never worked more than eight weeks on a screenplay.

Cary Grant (1904 – 1986) was an English-born American actor who became one of the most popular leading men in film history. Grant started his career in vaudeville before heading to Hollywood. He became a superstar in the late 1930s in a series of screwball comedies including The Awful Truth (1937) with Irene Dunne. He was a memorable C. K. Dexter Haven in The Philadelphia Story (1940) opposite Katharine Hepburn and James Stewart. He received two Best Actor nominations: Penny Serenade (1941) and None but the Lonely Hearts (1944). Other classic Grant films include Gunga Din (1939), Only Angels Have Wings (1939), and Arsenic and Old Lace (1944). He made four popular films with Alfred Hitchcock: Suspicion (1941), Notorious (1946), To Catch a Thief (1955), and North by Northwest (1959). He was presented with an Honorary Oscar at the 42nd Academy Awards in 1970.


Ingrid Bergman (1915 – 1982) was a Swedish actress who became an international star upon her Hollywood debut in Intermezzo (1939). Few actresses were as popular as Bergman during the 1940s. In fact, she was the number two box office draw (after Bing Crosby) in 1946. She starred opposite Humphrey Bogart in Casablanca (1942), For Whom the Bell Tolls (1943) opposite Gary Cooper, Gaslight (1944) for which she won the Best Actress Academy Award. She starred opposite newcomer Gregory Peck in Spellbound (1945) which was her first collaboration with director Alfred Hitchcock. Bergman would go on to win another Best Actress Academy Award for Anastasia (1956) and a Best Supporting Actress Academy Award for Murder on the Orient Express (1974).

To watch the film, click on the YouTube link below. Be sure to use this link because there are many versions of this film on the channel. None are as good as this print.

Once you’ve watched the film, please join our Zoom discussion on September 15, 2020, at 6:30 p.m. Central Time. The invitation and link to the meeting are below. 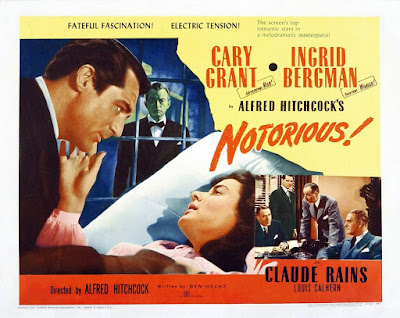 Discussion questions:
1. One of the major themes of the film is trust. Trust withheld or given too freely. What did you make of it all?
2. Some critics consider this one of Hitchcock’s most complicated romances. Do you agree with that assessment?
3. Hitchcock is known for the “mothers” in his films. Madame Anna Sebastian is a major character in Notorious. What did you make of her character?
4. There’s a lot of drinking going on in this film. What do you think all that drinking was about?