Carole Lombard and James Stewart are “Made for Each Other”

Made for Each Other (1939) is an American romantic comedy directed by John Cromwell and starring Carole Lombard, James Stewart, and Charles Coburn. The film was produced by David O. Selznick and the film was photographed by Leon Shamroy.

The film concerns John Mason (Steward), a young attorney in New York City, and his new bride Jane (Lombard). Mason is mild-mannered and a bit timid for a lawyer. When he is overlooked for a promotion, Jane encourages him to demand a raise and a promotion. Due to the Depression, instead of a raise, Judge Doolittle (Coburn) the head of the firm, requires all employees to take a pay cut. To make things more complicated, John’s mother Harriet (Lucile Watson) comes to live with the young couple. When Jane has a baby and the bills pile up, John is discouraged and feels like he is a failure.

Will things turn around for John and Jane? 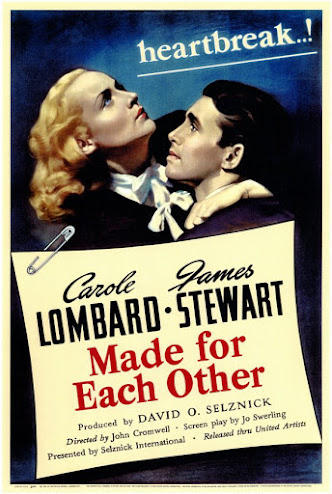 John Cromwell (1886 – 1979) was an American film and stage director. Cromwell started his career as an actor on the stage and in the early days of talking pictures. He was under contract to Paramount where he directed many pre-Code films. Some of the stars he directed during this time included Kay Francis, William Powell, and Jean Arthur. In 1933, he moved to RKO and directed Irene Dunne in Ann Vickers (1933), Spitfire (1934) with Katharine Hepburn, and Of Human Bondage (1934) with Leslie Howard and Bette Davis. Of Human Bondage was a tremendous box office success and made Cromwell a top director in Hollywood. Other films he directed include Little Lord Fauntleroy (1936) The Prisoner of Zenda (1937), Since You Went Away (1944), Anna and the Kind of Siam (1946), and Dead Reckoning. He is the father of actor James Cromwell.

Carole Lombard (1908 – 1942) was an American actress, well regarded for her many screwball comedy film roles. During the late 1930s, she was the highest-paid star in Hollywood. Lombard got her start in silent films as a child and set her mind on making movie acting her career. She was one of Mack Sennett’s bathing beauties, appearing in 15 of his comedy shorts before moving on to feature films. Her breakout performance came in 1934’s Twentieth Century co-starring John Barrymore. After that film, Lombard’s career soared. She starred in many successful comedies including Hands Across the Table (1935), My Man Godfrey (1936), which brought her a Best Actress Academy Award nomination, Mr. & Mrs. Smith (1941), and To Be or Not to Be (1942), her final film.

James Stewart (1908 - 1997) was an American actor whose career spanned almost five decades and 80 films. Stewart often portrayed the ideal of the average American who was decent and honest. Stewart signed a seven-year contract with Metro-Goldwyn-Mayer where he appeared in a variety of supporting roles in B and A pictures. It wasn’t until he was loaned out to Columbia Pictures to costar in Frank Capra’s You Can’t Take It With You (1938) that his home studio began to take notice. Still, his best roles were on loan to other studios including Mr. Smith Goes to Washinton (1939) at Columbia again and Destry Rides Again (1939) at Universal. M-G-M eventually cast him in The Philadelphia Story (1940) where he won the Academy Award for Best Actor which cemented his reputation as a leading man and star. From there he went on to make The Shop Around the Corner (1940) and The Mortal Storm (1940). After serving in the United States Army from 1941 - 1945, Stewart returned to Hollywood where he continued as a popular leading man. During the 1950s, Steward made two films with director Alfred Hitchcock which are considered two of the director’s best films: Rear Window (1954) and Vertigo (1958). Vertigo was voted the greatest film ever made by Sight & Sound in 2012.

Made for Each Other trivia:

To join the discussion on Zoom, March 23, 2021, at 6:30 p.m. click here. Once you RSVP, you will receive an invitation to the discussion with a link to the Zoom meeting.

Posted by Stephen Reginald at 4:27 PM