Call Northside 777 (1948) is a docudrama directed by Henry Hathaway and starring James Stewart, Richard Conte, Lee J. Cobb, and Helen Walker. The film is based on articles in the Chicago Daily Times.
P.J. McNeal (Stewart), a reporter the Chicago Times reluctantly takes the case of a man convicted of murdering a policeman in 1932 Chicago. Frank Wiecek (Conte) was sentenced to 99 years in prison.
Wiecek’s mother (Kasia Orzazewski) puts an ad in the newspaper offering a $5,000 reward for anyone who finds the true killers of the police officer since she is convinced her son is innocent. McNeal’s reluctance begins to shift when he thinks Wiecek may be innocent. 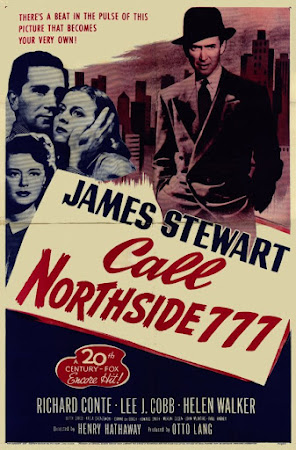 Henry Hathaway (1898 – 1985) was an American film director and producer. Hathaway started working in silent films in 1925 as an assistant to established directors like Victor Fleming and Josef von Sternberg. His first solo directorial effort was Heritage of the Desert (1932) starring Randolph Scott. Hathaway, along with Scott, would be known for western movies. Besides Scott, Hathaway directed Gary Cooper in several films, including The Lives of a Bengal Lancer (1935) which earned him his only Best Director Academy Award nomination. In 1940, Hathaway began working at Fox where he directed Tyrone Power in Johnny Apollo and Brigham Young (both 1940), Gene Tierney in China Girl (1942), Don Ameche and Dana Andrews in Wing and a Prayer (1944), and Call Northside 777 (1948) starring James Stewart and Richard Conte. After leaving Fox, he was one of three directors who worked on the western epic How the West Was Won (1962). He directed Steve McQueen in Nevada Smith (1966), directed John Wayne in True Grit (1968) which won Wayne his one and only Best Actor Academy Award.
James Stewart (1908 - 1997) was an American actor whose career spanned almost five decades and 80 films. Stewart often portrayed the ideal of the average American who was decent and honest. Stewart signed a seven-year contract with Metro-Goldwyn-Mayer where he appeared in a variety of supporting roles in B and A pictures. It wasn’t until he was loaned out to Columbia Pictures to costar in Frank Capra’s You Can’t Take It With You (1938) that his home studio began to take notice. Still, his best roles were on loan to other studios including Mr. Smith Goes to Washinton (1939) at Columbia again and Destry Rides Again (1939) at Universal. M-G-M eventually cast him in The Philadelphia Story (1940) where he won the Academy Award for Best Actor which cemented his reputation as a leading man and star. From there he went on to make The Shop Around the Corner (1940) and The Mortal Storm (1940). After serving in the United States Army from 1941 - 1945, Stewart returned to Hollywood where he continued as a popular leading man. During the 1950s, Steward made two films with director Alfred Hitchcock which are considered two of the director’s best films: Rear Window (1954) and Vertigo (1958). Vertigo was voted the greatest film ever made by Sight & Sound in 2012.
Richard Conte (1910 – 1975) was an American actor who came to prominence in the late 1940s under contract to 20th Century-Fox. He co-starred with James Stewart in Call Northside 777 (1948) and had the lead role in Thieve’s Highway (1949) directed by Jules Dassin (Night and the City 1950), and played Gene Tierney’s husband in Otto Preminger’s Whirlpool (1949). Conte worked constantly and had major roles in Ocean’s 11 (1960) and The Godfather (1972).
Call Northside 777 trivia:
To watch the film on YouTube, click the link below.
Why watch this movie?
To join the discussion on Monday, September 27, 2021, at 6:30 p.m. Central Time, click here. Once you RSVP, you will receive an invitation with a link to the discussion on Zoom.
Discussion questions:
Posted by Stephen Reginald at 5:30 PM