I Married a Witch (1942) is a romantic comedy fantasy directed by Rene Clair and starring Fredric March and Veronica Lake. The cinematography is by Ted Tetzlaff, music by Roy Webb, and costumes by Edith Head.
The plot concerns two witches in colonial Salem, Jennifer (Lake) and her father Daniel (Cecil Kellaway) burned at the stake because of the testimony of Puritan Jonathan Wooley.
Their spirits, imprisoned by a tree, are released when the tree is struck by lightning. Vowing revenge on Wallace Wooley (March), a descendent of Jonathan Wooley, who is running for governor and engaged to Estelle Masterson (Susan Hayward), the spoiled daughter of Dr. Dudley White (Robert Benchley) a friend and political supporter of Wallace, Jennifer comes up with a devious plot to destroy him.
Through a strange twist of fate, Jennifer’s affections change toward Wooley, much to the dismay of her father who is determined to seek revenge.
Will Jennifer have the strength to defy her father and let love triumph over witchcraft?
Rene Clair (1898 - 1981) was a French film director and writer. He directed silent films in his native France, but was lured to Hollywood where he directed five films. His first American film was The Flame of New Orleans (1941) starring Marlene Dietrich. The film was not a success and it would be a year before he made another American film. His most popular American film was And Then There Were None (1945) based on Agatha Christie’s novel of the same name. After World War II, Clair returned to France where he was considered one of the that country’s best film directors.
Fredric March (1897 - 1975) was an American actor and two-time Best Actor Academy Award winner. Also a famous stage actor, March won two Tony Awards as well and is one of a few actors to have won both the Academy Award and the Tony Award twice. March was an immediate success in films receiving his first Best Actor nomination in 1930. He won his first Best Actor Oscar for Dr. Jekyll and Mr. Hyde (1932) and his second for The Best Years of Our Lives (1946). During the 1930s and 1940s, March was a popular leading man starring opposite Greta Garbo, Joan Crawford, Janet Gaynor, Norma Shearer, Katharine Hepburn, and Carole Lombard. March continued acting on stage and in films until 1973, two years before his death from cancer.
Veronica Lake (1922 - 1973) was an American film, stage, and television actress. She was a popular star of film noirs, often paired with Alan Ladd in the 1940s. She was also famous for her peek-a-boo hairstyle. Her home studio, Paramount, dubbed her the peek-a-boo girl. Women and girls all over the world copied her hair-over-one-eye hairstyle. Lake became an overnight sensation with her role in I Wanted Wings (1940). During the height of her career, Lake was making $4,500 a week. Some of her popular films include Sullivan’s Travels (1941),  This Gun for Hire (1942), The Glass Key (1942), So Proudly We Hail! (1943), and The Blue Dahlia (1946). Lake’s career declined due to her struggle with alcoholism. She died from cirrhosis of the liver in 1973. She was 50 years old. 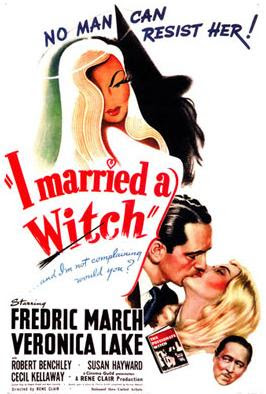 I Married a Witch trivia:
To watch the film on YouTube, click the link below.
Why watch this film?
To join the discussion on October 11, 2021, at 6:30 p.m. Central Time, click here. Once you RSVP, you will receive an invitation with a link to the discussion on Zoom.
Discussion questions:
’
Posted by Stephen Reginald at 7:02 PM