Edward G. Robinson and Burt Lancaster star in "All My Sons"

All My Sons (1948) is based on the play by Arthur Miller which ran on Broadway from January 29, 1947, closed on November 8, 1949, and ran for 328 performances. The film was directed by Irving Reis and starred Edward G. Robinson and Burt Lancaster. Other members of the cast include Louisa Horton, Mady Christians, Howard Duff, Arlene Francis, and Harry Morgan.

Joe Keller has built a manufacturing business that he hopes his son, Chris (Lancaster), will one day take over. But Chris has other plans. He wants to marry Ann Deever (Horton), who was once engaged to his brother, Larry, who was missing in action during World War II and presumed dead. Kate Keller refuses to believe her son is dead and has his room exactly as he left it, even going so far as to polish his shoes on a regular basis.

Ann's father and Joe Keller were partners in a plant that manufactured airplane parts for the military. An investigation determined that the company sold the government defective equipment. It was determined that the partners sold the parts knowing they were defective. Ann's father was convicted and sent to prison but Joe was exonerated. However, there has always been some doubt as to whether or not Joe was also responsible for the faulty airplane parts. This doubt hangs heavy over the Keller home and endangers Chris's relationship with Ann and his father.

When all the secrets are revealed, will the Keller family survive? 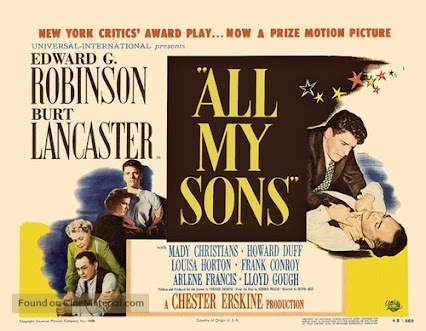 Irving Reis (1906 - 1953) was an American writer, producer, and director of both radio plays and motion pictures. Reis got his start as a photographer, eventually photographing publicity stills for various movie studios. He went to Hollywood and became a screenwriter at Paramount in 1938. From Paramount, he went to RKO where he directed the box office hit The Bachelor and the Bobby-Soxer (1947) starring Cary Grant, Myrna Loy, and Shirley Temple. Other films he directed include Enchantment  (1948), and The Four Poster (1952). Reis's died of cancer at the age of 47; he left a widow and three children.

Posted by Stephen Reginald at 6:25 PM