The Red Pony (1949) is a rural drama based on John Steinbeck's short story of the same name. The film was directed by Lewis Milestone and stars Myrna Loy and Robert Mitchum. Others in the cast include Shepperd Strudwick, Louis Calhern, Peter Miles, and Margaret Hamilton. The screenplay was written by Steinbeck with some changes, focusing on the chapters "The Gift" and "The Promise." The cinematography was by Tony Gaudio  (The Adventures of Robin Hood). The film score was written by Aaron Copland.
The plot focuses on Tom Tiflin (Miles) who is given a small pony by his father, Fred Tiflin (Strudwick). Tom learns how to take care of his pony with the help of hired hand Billy Buck (Mitchum), a man that Tom looks up to. They name the pony Gabilan.
The colorful family also includes Fred's father-in-law (Calhern) who is always telling stories about the old days when he led a wagon train across the country during the pioneer days. Fred finds his stories annoying but his wife, Alice (Loy) finds her father's eccentricities entertaining.
A crisis arises that threatens to destroy Tom's relationship with Billy. Will the two be able to work through the crisis and keep their friendship?
Lewis Milestone (1895 – 1980) was a Russian-born American film director. He is a two-time Academy Award-winner for Best Director: Two Arabian Knights (1927) and All Quiet on the Western Front (1930). Other notable films directed by Milestone include The Front Page (1931), Of Mice and Men (1939), A Walk in the Sun (1945), Les Miserables (1952), and Ocean’s 11 (1960).
Myrna Loy (1905 - 1993) was an American film, television, and stage actress. Loy was a trained dancer but decided to concentrate on acting, appearing in silent films before becoming a major star with the advent of sound. Perhaps Loy is most famous for playing Nora Charles opposite William Powell in The Thin Man (1934) and its subsequent sequels. Loy and Powell were one of the screen’s most popular acting teams; they appeared in 14 films together. Loy starred opposite the top leading men of the day including Clark Gable, Spencer Tracy, Tyrone Power, and Cary Grant. Some of her films include Wife vs. Secretary (1936), Libeled Lady (1936), The Great Ziegfeld (1936), Test Pilot (1938), Too Hot to Handle (1938), The Rains Came (1939), Love Crazy  (1941), The Bachelor and the Bobby-Soxer (1947), and Mr. Blandings Builds His Dream House (1948).
Robert Mitchum (1917 - 1997) was an American film actor, director, and singer. His breakthrough came in The Story of G.I. Joe (1945) for which he was nominated for a Best Supporting Actor Academy Award. He later starred in the film noir classic Out of the Past (1947) Crossfire (1947), Rachel and the Stranger (1948), River of No Return (1954) The Night of the Hunter (1955) Heaven Knows, Mr. Allison (1957), Home from the Hill (1960), Cape Fear (1962), and Ryan's Daughter (1970). Mitchum would remain busy until the late-nineties. Mitchum is rated number 23 on the American Film Institute's list of the greatest male stars of classic American cinema.
The Red Pony trivia
To watch the film on YouTube, click on the link below.
Discussion questions:
To join the discussion on February 14, 2022, at 6:30 p.m. Central Time, click here. Once you RSVP, you will receive an invitation and link to join the discussion on Zoom. 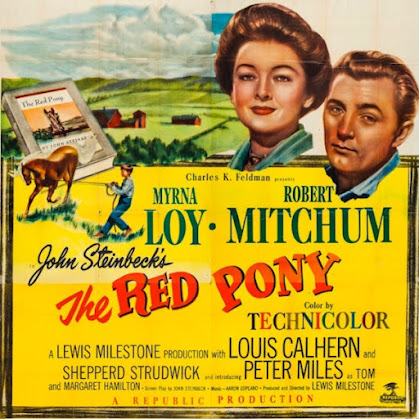 Posted by Stephen Reginald at 5:36 PM