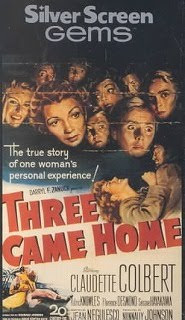 starred as Agnes Newton Keith, a prisoner of war in Borneo during World War II. Keith, an American author was married to a British administrator assigned to the island located north of Australia.

was an important property that was supervised by the legendary Darryl F. Zanuck

production filmed the establishing shots and other scenes for the film, where possible, at their original locations.

Best-selling memoir
Keith’s best-selling memoir focuses on her years in a Japanese prisoner of war camp with her three-year-old son. After the initial Japanese invasion of Borneo, husbands and wives were separated and sent to different camps on the island. The film chronicles the trials and tribulations of the women prisoners and how they coped with hard labor, little food, and poor living conditions.

Tea with the Colonel
The man in charge of the camps is one Colonel Suga, portrayed by Sessue Hayakawa

, who develops an interesting and strange relationship with Keith. Keith, born in Oak Park, IL, and educated at Berkley, had written favorably of the Asian people, something that did not go unnoticed by Suga. It turns out that Suga was educated in Washington State and was familiar with American ways and culture. The relationship doesn’t necessarily win Keith any special favors, but it helps humanize Suga’s character, which for the time, was remarkable.

All about Claudette
Colbert, known for her glamorous roles and insistence that she not be photographed on the right side of her face, put vanity aside when she decided to play Keith. For most of the film she’s dirty and in ragged clothing, with no makeup (at least none that we can tell), and she even allows the right side of her face (sometimes called the dark side of the moon by critics) to be photographed! So determined was Colbert to be true to the character that she refused a stand-in for a very physical scene with a Japanese soldier. It was during this scene that she injured her back, forcing her to drop out of the production of All About Eve

. Yes, Colbert was set to play Margo Channing; she was writer-director Joseph Mankiewicz’s

first choice. Reflecting on this turn of events, Colbert was reported to have “cried for two years.”

Criterion treatment, please
It’s unfortunate that more people don’t know about this film today. It’s in the public domain, so there are many copies of it available on DVD. The film quality is decent and in some versions, above average, but it would really benefit from the “Criterion treatment.” It deserves a critical commentary and film restoration.

Having said all that, Three Came Home is still compelling viewing and a showcase for Colbert’s versatility as an actress of great range and depth.
Posted by Stephen Reginald at 1:04 PM