This Gun For Hire: 1st Film in “High Heels and Fedoras” series at Daystar Center February 12, 2013 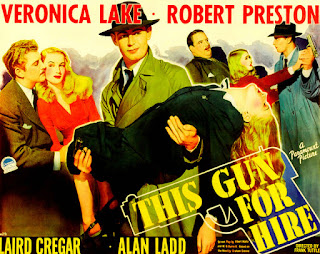 
This Gun For Hire, based on the novel by Graham Greene, was released in 1942, long before the label “film noir” was invented. As an early film in the genre, some of the plot devices that we associate with film noir are here: A killer who is a major protagonist, a cool female lead, an honest-by-the-book cop, and a double-crossing villain.

The plot concerns a hired gun named Raven (Alan Ladd) who has been double-crossed by a man named Willard Gates (Laird Cregar) who represents a chemical company that may be working with enemies abroad, selling them poison gas. To keep tabs on Gates, the U.S. government enlists a beautiful novelty entertainer named Ellen Graham (Veronica Lake). Ellen is a magician who sings while she performs her magic act. She auditions for Gates, who apart from his duties at the chemical company, owns a popular nightclub. Her audition captivates Gates and he hires her.

Straight and vicious—that’s what this picture is. But it is a good cut above the average, both in its writing and its tensile quality. Bosley Crowther, The New York Times


While on a train to perform at Gates’s Neptune Club, she accidentally runs into Raven. Gates, also on the same train, sees the two sitting next to each other. He assumes they’re working together, which sets him on edge and puts Ellen’s life in danger. Ellen’s cop boyfriend, Michael (Robert Preston) does his best to save her and capture Raven.

Lake was an established star when the movie was released. Ladd, as Raven, gave a breakout performance making him an overnight sensation. New York Times movie reviewer, Bosley Crowther compared Ladd’s performance to James Cagney’s in The Public Enemy a decade earlier. In his 1942 review of the film he said, “Keep your eye peeled for this Ladd fellow; he’s a pretty-boy killer who likes his work.:” Crowther also complimented the leading lady: “Miss Lake is a competent customer, and handles her men with cool disdain.”

The chemistry between Lake and Ladd was noted by the public and the executives at Paramount. It didn’t hurt that Lake was 4' 11" tall, making her the only leading lady Ladd worked with who was shorter than he was. Ladd was reported to be 5' 5" tall. The two costarred in a total of four films, all very popular with critics and 1940s film audiences.

To purchase tickets for the February 12 screening, click here. Tickets are $5 per person general admission and $3 for students and seniors. Tickets may be purchased at the door.

Discover the other films in this series by clicking here. 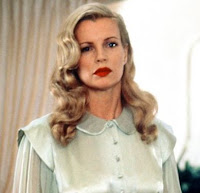 Posted by Stephen Reginald at 9:06 PM