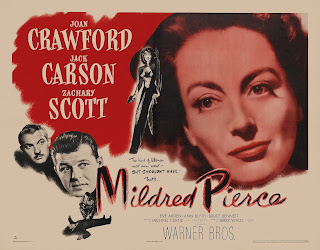 
Mildred Pierce was a critical and financial hit when released in 1945. It resurrected the career of screen legend, Joan Crawford, who many had written off as a has-been. The movie was a showcase for some new talent too, but it was Crawford’s film and she commands the screen in every scene she’s in.

The straightforward narrative in the James M. Cain novel was changed for the film version. Mildred’s story is told in flashback, a popular film noir convention that works really well and adds to the movie’s texture. The film itself is put together very nicely with the Warner Brothers A-Team pulling out all the stops. Cinematographer Ernest “Ernie” Haller’s black and white photography is beautifully atmospheric. The angles, the contrasts, are seamless and help advance the story without getting in the way. The score by Max Steiner is lush without being overwhelming, at least not overwhelming as far as Steiner scores go (They’re all kind of overwhelming, actually). Legendary makeup artist Perc Westore makes Crawford’s transition from waitress/working mom into successful/sophisticated businesswomen seem natural and believable. Much of Crawford’s look in this film, and for the rest of the decade, is due in great part to the costuming of Milo Anderson. Last but not least, director Michael Curtiz assembled all the pieces together to form a perfect whole, but Curtiz wasn’t at all set on working with Crawford.


According to Crawford, Curtiz wanted Barbara Stanwyck to play Mildred. He didn’t want to work with a “difficult” has-been. In order to change Curtiz’s mind, Crawford submitted to a screen test. This was unheard of for an established star, but so determined was Crawford to snag the role that she consented. Crawford’s screen test impressed Curtiz enough that he agreed to direct her. And for Crawford, a new career was born at Warners.

Mildred Pierce was nominated for six Academy Awards, including Best Picture and Best Actress. Crawford’s Best Actress Award was the only win, put it propelled her back to the top of the heap, giving fellow Warner contract-player, Bette Davis a run for her money. Ironically, Davis’s career was on a downward arch while Crawford was starring in some critical and commercially successful melodramas. After Mildred Pierce, Crawford starred in Humoresque (1946), Possessed (1947), Daisy Kenyon (1947), and Flamingo Road (1949). Possessed brought her a second Best Actress nomination.

Mildred Pierce isn’t considered a true film noir movie, by some critics. But it sure feels like film noir to this movie fan.

To purchase tickets for the May 14 screening, click here. Tickets are $5 per person general admission $3 for students and seniors. Tickets may also be purchased at the door. To stay on top of film events like this, join the Chicago Film Club Meetup.


The Venue 1550 is located at 1550 S. State St. in the Daystar Center. The Daystar Center offers a variety of educational, artistic and cultural activities, including classes for children that teach practical life skills like social aptitude, creativity and cultural awareness in fun ways; classes for adults that give space for self-reflection and improvement; room rentals for many different-sized groups in several multipurpose rooms. For more information, call 312.674.0001 or visit their Web site. 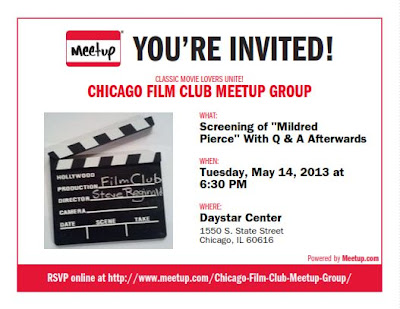