What were the top posts during 2013 at Classic Movie Man? No surprise that they were all related to classic films (duh!), but many of the posts were related to the Chicago Film Club. The club is currently featuring screwball comedies, but the last two series featured Chicago-themed classics and film noir. So here we go, starting with number 10 and working our way down to number one.

10. Chicago Film Club Screens “Theodora Goes Wild” November 19—One of the screwball comedies the film club featured recently was a film many people hadn’t seen. Released in 1936 and a big hit in its day, it’s sort of fallen through the cracks these days, but it turned out to be one of the favorites in the series.

9. New Barbara Stanwyck biography out this month—November saw the release of part one of a two-part biography of the screen legend. At over 800 pages (over 1000 with notes and references), the biography covers the years 1907 to 1940. Filled with tons of information about the star that no one ever knew before, it was an engaging and surprisingly quick read. Thanks to the publisher, we were able to give away two copies during two separate film club screenings.

8. “Out of the Past”: 6th and Final Film in “High Heels and Fedoras” series at Daystar Center July 9, 2013—One of the films from the film noir series, this 1947 classic was a new find for many. Perhaps because the director (Jacques Tourneur) isn’t a household name like Billy Wilder or Alfred Hitchcock, it doesn’t have the same reputation as some other film noirs like Double Indemnity.

7. “Mildred Pierce”: 4th Film in “High Heels and Fedoras” series at Daystar Center May 14, 2013—The film that earned Joan Crawford the Academy Award for Best Actress is one entertaining melodrama. The narrative sucks you in an never lets you go until “The End” appears on the screen.

6. Classic Films in Context: “Pinky” 1949—A holdover from last year, this film has gained more visibility thanks to several screenings on Turner Classic Movies. One of the biggest box office hits of the late 1940s, it features Oscar-nominated performances from the three female leads.

5. “The Postman Always Rings Twice”: 5th Film in “High Heels and Fedoras” series at Daystar Center June 11, 2013—Another movie from the film noir series. The chemistry between Lana Turner and John Garfield is practically combustible. 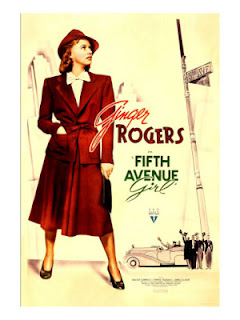 3. A Tale of Two Chauffeurs: “Fifth Avenue Girl” and “Downton Abbey”—This post compared the 1939 screwball comedy, Fifth Avenue Girl with one of the major plot lines in Downton Abbey. Both featured chauffeurs who were socialists and in love with the rich man’s daughter.

2. Screwball Comedy and the Feminine Mystique—New Film Club series begins in September—This post announced the current screwball comedy series which has proved to be very popular with film club
members. Should there be a screwball comedy part two?

1. Irene Dunne and Cary Grant: Making It All Look So Easy—This was my contribution to the “Dynamic Duos in Classic Film” blogathon. Dunne and Grant are probably my favorite acting team and apparently there are many out there that agreed with me.

Posted by Stephen Reginald at 5:19 PM