Another Christmas season and another challenge to come up with more holiday classics from Hollywood’s golden age. While some of these films aren’t Christmas movies per se, they all feature the holiday season. For a lists of more holiday movie classics, see the links below. Enjoy and Merry Christmas! 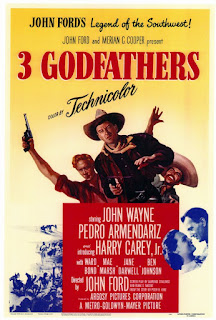 3 Godfathers—1948 John Wayne, Pedro Armendariz and Harry Carey Jr. play cattle rustlers who rob a bank in Welcome, Arizona. When they are pursued into the desert, they lose their horses and end up walking in search of water. During their search, they come upon a woman who is about to give birth. With the help of the fugitives, she has a baby boy. She names the baby after the men who helped her in her time of need. Before dying the mother, asks the three godfathers to take care of her baby. William (Carey) wounded in the leg during the bank robbery dies during their trek. Pete (Armendariz) breaks his leg and cannot travel any further. Robert (Wayne) soldiers on in a semi-delirious state, and somehow manages to make it to New Jerusalem, with the baby, where he collapses. He is arrested, but is considered a hero because of his heroism and is sentenced to the minimum of a year and a day in jail. Directed by the legendary John Ford, 3 Godfathers is sort of a western version of The Three Wise Men shot in brilliant Technicolor. 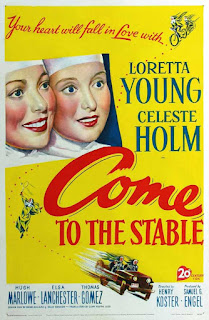 Come To The Stable—1949 Loretta Young and Celeste Holm play two French nuns who come to the New England town of Bethlehem, determined to build a children’s hospital with the help of the locals there. The screenplay is based on a short story written by Clare Boothe Luce (The Women) and a screenplay by Sally Benson (Meet Me In St. Louis). Besides the two main stars, the supporting cast includes Hugh Marlowe, Elsa Lanchester, Thomas Gomez, Dooley Wilson, and Regis Toomey. Do the enterprising nuns get their hospital? What do you think? The film features some beautiful black and white cinematography by Joseph LaShelle (Laura) and able direction by Henry Koster (The Bishop’s Wife).

Backstory: Come To The Stable was nominated for seven Academy Awards including a Best Actress nod for Loretta Young and Best Supporting Actress nods for Celeste Holm and Elsa Lanchester. Clare Boothe Luce converted to Roman Catholicism in 1946, the inspiration for this inspirational tale.

Susan Slept Here—1954 Dick Powell plays Mark Christopher, an Academy Award winning screenwriter with writers block. Desperately trying to flesh out a decent script, Mark gets a surprise visit on Christmas Eve. Sergeant Sam Hanlon (Herb Vigran) delivers seventeen-year-old Susan Landis (Debbie Reynolds) to his fancy bachelor apartment. Susan, abandoned by her mother was arrested for vagrancy and assaulting a sailor. Rather than have her stay in jail over the holidays, the sergeant suggests that Susan stay with him until the day after Christmas, knowing that Mark was interested in writing a script on juvenile delinquency. Seriously, what could go wrong? Well, for one, Mark has a very jealous fiancee (Anne Francis) and Susan turns into quite the handful. And it gets worse when Susan develops a crush on Mark. When Mark finds out that Susan will most likely spend her days in a detention facility until she is 18, Mark whisks her off to Las Vegas and marries her. Mark tells his friends he only married her to prove to the judge that Susan has turned her life around. Mark goes to extremes to avoid consummating the marriage, but Susan has fallen hard for Mark. Will this May-December romance work? A fun comedy if you can get past the idea of a 35-year-old falling for a teenager, but that was Hollywood in the 50s. And dig all the cool modern Christmas decorations, including Mark’s tree!

Backstory: This was Dick Powell’s last movie screen appearance. Debbie Reynolds was 22 and Dick Powell was 50—not passable for 35 at all, sorry—when Susan Slept Here was released. The cinematography was by the legendary Nicholas Musaraca, famous for his great black and white camerawork with noir classics like Out of the Past. 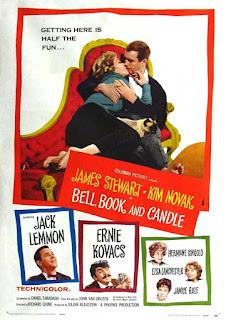 Bell, Book and Candle—1958 Set during the Christmas holiday season, Bell, Book and Candle features an odd group of witches and warlocks living and working their magic in New York’s Greenwich Village. Kim Novak plays Gillian “Gil” Holroyd owner of an art gallery of African art. James Stewart is Shep Anderson, a book publisher who Gil is smitten with. When Gil learns that Shep is about to marry Merle Kittridge (Janice Rule), Gil’s old college rival, she casts a spell on Shep and falls in love with him herself. Things get complicated (Don’t they always? Well, yeah, it’s the movies) when Gillian has to choose whether or not she is willing to give up her supernatural powers for love. The movie features a great supporting cast that includes Jack Lemmon as Novak’s bongo-playing-warlock brother, Ernie Kovacs as a best-selling author, Hermione Gingold, Elsa Lanchester (as two older witches), and Rule. And let’s not forget Pyewacket, Gil’s magical Siamese cat.

Backstory: Harry Cohn agreed to loan Kim Novak to Paramount to make Vertigo if he could get James Stewart to costar with Novak in Bell, Book and Candle. This film is also considered the last film where Stewart played a leading romantic role. The creators of the hit TV show Bewitched credited Bell, Book and Candle as partial inspiration. 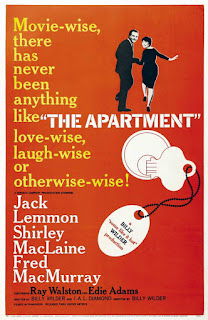 The Apartment—1960 This Billy Wilder classic stars Jack Lemmon as Calvin Clifford “Bud” Baxter, a lonely office worker at a big national insurance company in New York City. In order to climb the corporate ladder, Bud lets four company managers use his apartment in New York’s Upper West Side as a get-away for their extramarital affairs. This causes some problems with Bud’s neighbors who think he’s a loud, party animal lady-killer. When the personnel director, J.D. Sheldrake (Fred MacMurray) finds out why Bud’s managers gave him such glowing reviews, Sheldrake gives Bud a promotion in exchange for exclusive use of his apartment on demand. He even gives him two tickets to The Music Man—the hottest Broadway ticket of the day—to seal the deal. Bud has his eyes on Fran Kubelik (Shirley MacLaine) an elevator operator (remember them?) at his office building. He asks her to The Music Man, which she agrees to, but she stands Bud up at the theater. Bud soon discovers that Fran is having an affair with Sheldrake who promised to marry her only to go back to his family at Christmas. Fran is so distraught by this that she attempts suicide. When Sheldrake asks Bud for the key to his apartment on New Year’s Eve, Bud refuses and quits his job. Sheldrake tells Fran that Bud quit the firm at a New Year’s Eve party, which makes her realize that Bud is the man that’s cared for her all along. With one of the most famous closing lines in film history, The Apartment will warm your heart.

Backstory: This is the second film Jack Lemmon made with Billy Wilder. Paul Douglas was set to play J.D. Sheldrake, but he passed away before production started and was replaced by Fred MacMurray who hadn’t worked with Wilder since Double Indemnity (1944). MacMurray was regularly harassed in public after the film was released. One lady went so far as to hit him with her pocketbook!

There are so many great classic movies to watch during the holidays. The above are just a small sampling. What are your favorites? For a list of some other classic Christmas movies, click on the links below.

Posted by Stephen Reginald at 3:46 PM