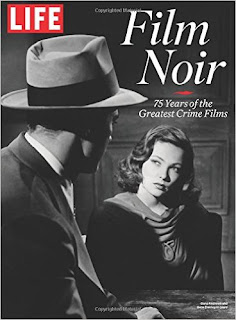 When someone tweeted the cover of LIFE Film Noir: 75 Years of the Greatest Crime Films, I had to go out and buy it. After all it had Dana Andrews and Gene Tierney on the cover! What it is is a 96-page glorified magazine with neat images from some of the most famous films noir. Author/journalist J. I. Baker is credited on the masthead as editor and writer. The brief introduction is credited to him, but the essays that accompany the films don’t include bylines. The film profiles are short and the entire book can be read in under an hour.

Of the 20 films profiled—starting with The Maltese Falcon (1941) and ending with L.A. Confidential (1997)—film noir fans are bound to criticize some of the choices. I for one was surprised to see Hitchcock’s Shadow of a Doubt (1943) on the list. Shadow of a Doubt is one of my all-time favorite movies and although there are noir elements to it, I don’t generally associate it with noir. The writer acknowledges this by stating, “Though Hitchcock isn’t generally associated with noir, he had worked in Berlin early in his career and was deeply influenced by German expressionism, which helped define the genre’s look.”

Designed to sell on the newsstand along with magazines like People and Us, 75 Years of the Greatest Crime Films is worth a look, but at $13.99 retail, it may be a bit steep for what it offers. You can pick up your copy wherever magazine are sold and from Amazon. But a trip to your local library may be the most economical option.

Posted by Stephen Reginald at 7:21 PM