Hail the Conquering Hero (1944) is a satirical comedy/drama about Woodrow Lafayette Pershing Truesmith (Eddie Bracken). Woodrow who wants to be a Marine like his father “Hinky Dinky” Truesmith who died a hero in World War I. After only a month, Woodrow is discharged from the Marines due to his chronic hay fever. Disappointed and embarrassed, Woodrow pretends to be fighting overseas while secretly working at a shipyard in San Diego.


By chance, Woodrow meets six Marines who just returned from the Battle of Guadalcanal in a local tavern. He buys them a round of drinks and discovers that Master Gunnery Sergeant Heffelfinger (William Demarest) served with Woodrow’s father in the 6th Marines in World War I. The Marines concoct a scheme to save Woodrow from embarrassment by telling his mother that he has received a medical discharge. The seemingly harmless deception gets completely out of control when Woodrow is given a hero’s welcome in his hometown.

Woodrow, never comfortable with the deception, is at the breaking point when his girlfriend Libby (Ella Raines), who he told not to wait for him, is engaged to the mayor’s son. Will Woodrow be able to tell the truth without destroying his family’s reputation? Will his hometown reject their “hero?” 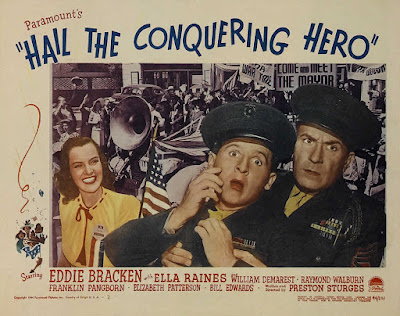 This was Sturges’s last movie for Paramount. It was nominated for an Academy Award for Best Writing, Original Screenplay. You’ll be happy to discover folks from the Preston Sturges stock company including Raymond Walburn, Franklin Pangborn, and Esther Howard.

In 2015, the United States Library of Congress selected the film for preservation in the National Film Registry, finding it “culturally, historically, or aesthetically significant.”


Before the movie, grab a cup of coffee from Overflow Coffee Bar, located within the Daystar Center. You can bring food and beverages into the auditorium; we even have small tables set up next to some of the seats. General Admission: $5 Students and Senior Citizens: $3.


Posted by Stephen Reginald at 8:35 PM