Hands Across the Table (1935) is a classic screwball comedy starring Carole Lombard and Fred MacMurray in their first movie together (The two starred together in a total of four films). 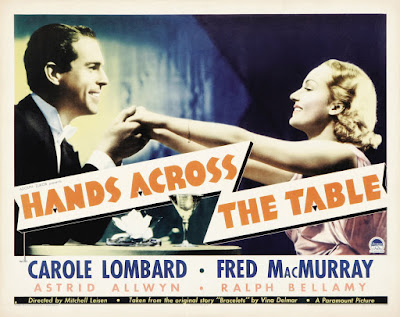 Directed with a steady hand by Mitchell Leisen, Hands Across the Table did wonders for the careers of both Lombard and MacMurray. Lombard was already a top star, but her performance in this film was a huge hit with both critics and the public. MacMurray appeared in seven movies in 1935, but his performance in Hands Across the Table elevated his status to that of a popular and sought after leading man.

This movie was so popular that Lombard and MacMurray went on to star in three other films. The film also features a top-notch supporting cast, including Ruth Donnelly, Marie Prevost, and Ralph Bellamy.

Stephen Reginald is a freelance writer and editor. He has worked at various positions within the publishing industry for over 25 years. Most recently he was executive editor for McGraw-Hill’s The Learning Group Division. A long-time amateur student of film, Reginald hosts “Chicago Film Club,” a monthly movie event held in the South Loop, for the past two years. Reginald has also taught several adult education film classes at Facets Film School, Chicago.
Posted by Stephen Reginald at 5:28 PM