Review of “All My Sons” at #NoirCityChicago

Monday night the A Film at Noir City Chicago was the film adaptation of Arthur Miller’s award-winning play, All My Sons (1948). The film starred Edward G. Robinson and Burt Lancaster as father and son respectively. 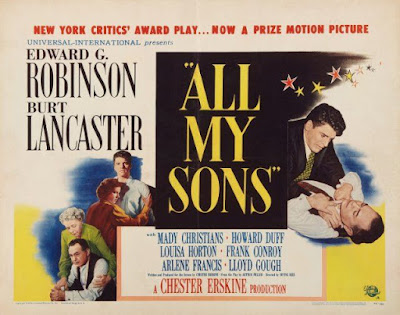 The movie was introduced by Alan K. Rode, film historian and author of Michael Curtiz: A Life in Film. He made it clear that this film didn’t fit the film noir category, but because of its dark thematic elements thought it would be appreciated by a film noir crowd. He was right. The film was dark and somber, but it was also superbly acted. Rode noted that photographer-turned-playwright-turned director Irving Reis overall did a good job directing the film, but thought the cinematography was a bit static. To be honest, I didn’t notice this (maybe I need to see it again); I found the subject matter and the performances compelling enough.

As the father, Edward G. Robinson was terrific. His characterization was multidimensional, which made Joe Keller a flesh and blood human being. Joe is flawed for sure, but not entirely unsympathetic. As Joe’s son, Chris, Burt Lancaster was solid. Physically, he doesn’t resemble Robinson at all, but his characterization was very strong without any of the screen chewing that he displayed in I Walk Alone, released the same year. The other cast members: Louisa Horton, Mady Christians, Howard Duff, and Arlene Francis were also very good.
All My Sons was definitely not a film noir, but it was engrossing cinema nonetheless.

The #NoirCityChicago film festival, wraps up on Thursday, August 23, 2018. Looking forward to this festival coming to again in 2019.

Posted by Stephen Reginald at 7:31 PM