Summer Under the Stars with Dana Andrews—August 22, 2018

I’m always a little depressed in August because I know the summer is nearing an end. But TCM helps make it better with their annual “Summer Under the Stars” tributes.

My favorite movie actor from the Golden Age of Hollywood is Dana Andrews. I’ve always felt that his style was so natural and contemporary. He created some film characters that will live on forever. Like Donald Martin in The Ox-Bow Incident (1943), Detective Mark McPherson in Laura (1944), Eric Stanton in Fallen Angel. Pat Gilbert in State Fair, Logan Stuart in A Walk in the Sun (all 1945), and perhaps his most well know, Fred Derry in The Best Years of Our Lives. Other memorable roles include, State’s Attorney Henry L. Harvey in Boomerang!, Walt Dreiser in My Foolish Heart (1949), and Detective Mark Dixon in Where the Sidewalk Ends (1950).
Unfortunately, not all of the films mentioned above are included in Dana’s day. One picture that I wish was on the schedule is Daisy Kenyon (1947). Considered a vehicle for Joan Crawford, Andrews gives a tour-de-force performance as the conflicted lawyer Dan O’Mara. It’s a multilayered characterization that has been overlooked, in my opinion.

Of the Andrew films they’re screening tomorrow, here are my picks, in broadcast order.

Curse of the Demon (1958)—Andrews plays scientist out to prove that the occult and witchcraft is all superstition and hysteria. While taking part in a seminar in , he begins to have doubts about his earlier conclusions.

The Best Years of Our Lives (1946)—This is perhaps Andrews’s finest screen performance. Returning veteran Fred Derry comes face-to-face with the reality of being a civilian in post-World War II America. I can’t believe the Academy overlooked his performance in this classic film.

The Ox-Bow Incident (1943)—Andrews plays doomed rancher Donald Martin in this film adaptation of Walter Van Tilburg Clark’s classic novel. This was a real breakout performance, again no nod from the Academy.

Where the Sidewalk Ends (1950)—As Mark , a compromised city cop, Andrews is pitch perfect. This film features his last screen pairing with Gene Tierney. 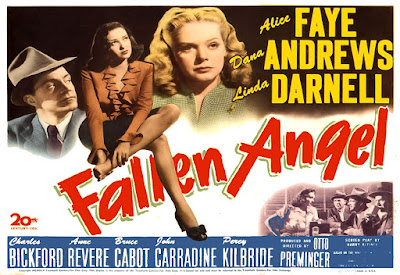 Fallen Angel ( 1945)—As a conman out to swindle Alice Faye of her family fortune, Andrews’s characterization of Eric Stanton is tinged with sadness, which makes his character all too human and surprisingly sympathetic.

A Walk in the Sun (1946)—Another overlooked performance in a film that today is credited with having a direct influence on Steven Spielberg’s Saving Private Ryan. (1998).

For the complete schedule of the films of Dana Andrews, click here.

Posted by Stephen Reginald at 11:01 PM

Email ThisBlogThis!Share to TwitterShare to FacebookShare to Pinterest
Labels: A Walk in The Sun, Boomerang, Classic Movie Man, Dana Andrews, Fallen Angel, Laura, Stephen Reginald, Summer Under the Stars, The Best Years of Our Lives, Where the Sidewalk Ends