Ronald Colman has trouble with reality in “A Double Life”


A Double Life (1947) is a film noir directed by George Cukor, starring Ronald Colman and Signe Hasso. The husband and wife team of Ruth Gordon and Garson Kanin wrote the screenplay. Milton R. Krasner did the cinematography and Miklos Rozsa wrote the score.

Tony and Brita star in Othello to wonderful reviews and the play runs for over a year on Broadway. As time goes by, Tony finds it difficult to distinguish between the character he is playing and reality. Will Tony be able to hold on to his sanity or will he disintegrate into madness.

George Cukor (1899 – 1983) was an American director. He was famous for directing comedies and literary adaptations of classics like Little Women (1933) and David Copperfield (1935). He was famously fired from directing Gone with the Wind (1939), but that incident didn’t mar an impressive directorial career that included The Philadelphia Story (1940), Gaslight (1944), and Born Yesterday (1950). Cukor won an Academy Award as Best Director for My Fair Lady (1964).

Ronald Colman (1891 – 1958) was an English-born actor whose career started in the theatre. In 1923, Colman appeared opposite Lillian Gish in the silent film The White Sister. He was a hit with the public and starred in over 20 silent films in America. Due to his wonderfully trained stage voice, Colman made the transition to talking pictures with ease. Some of his sound films include Clive of India (1935), A Tale of Two Cities (1935), Lost Horizon (1937), The Prisoner of Zenda (1937), The Talk of the Town (1942), and Random Harvest (1942). Colman was nominated three times for the Best Actor Academy Award. He finally won for his performance in A Double Life (1947).

Signe Hasso (1915 – 2002) was a Swedish actress who was promoted in the United States by RKO Pictures as “the next Garbo.” Although she wouldn’t live up to the promotion, Hasso had some memorable film roles in Heaven Can Wait (1943), The Seventh Cross (1944), Johnny Angel (1945), and The House on 92nd Street (1945). Hasso also acted on the Broadway stage and appeared on television making guest appearances on Route 66, Starsky and Hutch, Trapper John, M.D., and Hart to Hart. 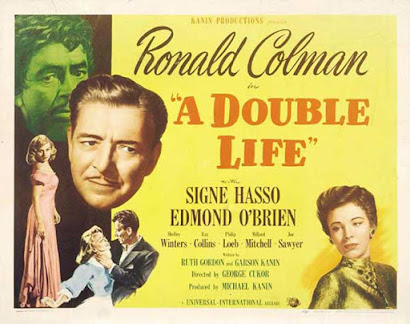 Other actors you will recognize in smaller roles include Shelly Winters (this was her breakout film performance), Edmund O’Brien, Ray Collins, Whit Bissell, Betsy Blair, and Millard Mitchell.

To watch the film, click on the YouTube link below. Please use this link because there are other versions on the channel that aren’t as good.

Questions for discussion:
1. Noir or not? Does this film fit in with your idea of what makes a movie qualify as a film noir?
2. Was Ronald Colman convincing as a major Broadway star?
3. Did Colman and Signe Hasso have good on-screen chemistry?
4. There are lots of double images in the film; do you recall any of them? There is the contrast between illusion and reality. Our hero seems to have trouble distinguishing between the two as the film progresses.
5. Was the ending inevitable? Does it help with its film noir credibility?

Posted by Stephen Reginald at 2:23 PM