Carole Lombard and Fredric March star in “Nothing Sacred” 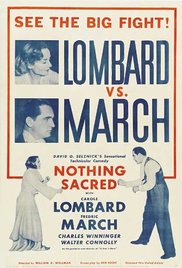 Nothing Sacred (1937) is a screwball comedy film directed by William A. Wellman, produced by David O. Selznick, with a screenplay by Ben Hecht. Oscar Levant wrote the original music score.

New York newspaper reporter Wally Cook (March) was demoted to writing obituaries due to a scandal involving a phony African nobleman and a charity event in the nobleman’s honor. Wally begs his boss Oliver Stone (Walter Connolly) for a second chance.

Wally points out a story about Hazel Flagg (Carole Lombard), a young woman dying of radium poisoning. Wally convinces his boss that a story on the dying girl could boost the circulation of his paper the Morning Star. Wally is off to the fictional town of Warsaw, Vermont in pursuit of Hazel Flagg and her story. Wally meets Hazel and he invites her and her doctor to New York as guests of the paper. Unknown to Wally is the fact that Hazel isn’t dying of radium poisoning and that her original diagnosis was a mistake. Hazel anxious to leave the sleepy town of Warsaw for a trip to New York doesn’t let on that she’s not dying.

Will Hazel’s secret be found out and will Wally be sent back to writing obituaries once again?

Carole Lombard (1908 – 1942) was an American film actress best know for starring in a string of screwball comedies. So popular was she in the genre that Life magazine dubbed her “the screwball girl.” Lombard began her career in silent films, but her career was stalled when she was in a car accident that scarred her face. After the accident, she was dropped from her Fox Film Corporation contract. She underwent plastic surgery, which was relatively new at the time, hoping it would help jumpstart her career. The surgery was a success resulting in a minor scar that was hardly noticeable on screen. She made almost 40 films before her breakout role as Lily Garland opposite John Barrymore in Twentieth Century. Now a bona fide star, Lombard would be the highest-paid actor in Hollywood by the late 1930s. Lombard was Oscar-nominated for My Man Godfrey (1936) and starred in Alfred Hitchock’s only screwball comedy Mr. & Mrs. Smith. In 1939, Lombard married Clark Gable and the two were the most famous couple in Hollywood. Lombard died tragically in a plane crash on January 16, 1942. She was 33 years old. Her final film was the Ernst Lubitsch comedy To Be or Not to Be (1942) which was released after her death. 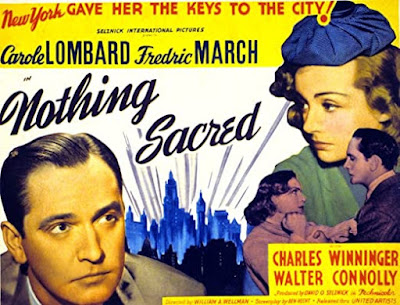 Frederic March (1897 – 1975) was an American actor of both stage and film. He started his career as an extra in silent movies and by 1926 he appeared on Broadway and by the end of the decade, he was in Hollywood. March was one of the most successful actors working in Hollywood during the 1930s and 1940s. He starred in Dr. Jekyll and Mr. Hyde (1932) a role for which he won a Best Actor Oscar, Design for Living (1933), Les Miserbles (1935), Anna Karenina (1935) with Greta Garbo, and A Star is Born (1937) with Janet Gaynor. In the 1940s, March starred in I Married a Witch (1942) and The Best Years of Our Lives, which brought him his second Best Actor Oscar. March was also a major star on Broadway. He won Tony Awards for Best Actor for his performances in Years Ago (1947) and Long Day’s Journey into Night (1956).


To watch the film, click on the YouTube link below. Please use this link because there are other versions that are on the channel that isn’t as good.


Questions for discussion:
1. Were you surprised to see such an old film in color? Did color add anything to the narrative?
2. What did you think of Carole Lombard’s performance?
3. What did you make of the town of Warsaw? Did you understand why Hazel wanted to leave it?
4. Was Frederic March convincing as a newspaperman?
5. Was there a message or meaning behind the comedy? If yes, what was the message?

Posted by Stephen Reginald at 12:09 PM