Christmas in July (1940) is a comedy written and directed by Preston Sturges and starring Dick Powell and Ellen Drew.

Jimmy MacDonald (Powell) was one of the millions of people to enter the Maxford House Coffee contest. He submitted the slogan "If you can't sleep at night, it's not the coffee, it's the bunk." Jimmy dreams of proving to himself and others that he is a success and able to provide for his mother (Georgia Caine) and marry his girlfriend Betty Casey (Drew).

As a joke, three coworkers send Jimmy a fake telegram announcing that he has won the contest. When his boss hears that Jimmy "won" the contest, he promotes him with a fancy office and a secretary. When the incident snowballs out of control, things really get crazy.

Will Jimmy's newfound success be short-lived or will he be able to prove that he deserves to be taken seriously as an astute businessman?

Preston Sturges (1898 - 1959) was an American playwright, screenwriter, and film director. Sturges was one of the first film directors to direct his own screenplays, opening up the door for Billy Wilder and Joseph L. Mankiewicz to do the same. Sturges was a successful playwright and Hollywood screenwriter and script doctor. As a writer-director, Sturges had an amazing output of films in a period of five years, all considered classics today. These films include The Great McGinty (1940), Christmas in July (1940), The Lady Eve (1941), Sullivan's Travels (1941), The Palm Beach Story (1942), Hail the Conquering Hero (1944), and The Miracle of Morgan's Creek (1944). After leaving Paramount Pictures in a dispute with upper management, Sturges's career declined and he never produced anything close to the quality of his earlier successes. In spite of this decline, Sturges is considered one of the greatest talents to come out of Hollywood.

Dick Powell (1904 - 1963) was an American actor, singer, producer, and director. He began his movie career in musicals and comedies but eventually toughened up his image in the mid-1940s when he became a popular star of film noir. He was the first actor to portray Philip Marlowe in Murder, My Sweet (1944). After appearing in his last film, Susan Slept Here, Powell started directing. In the 1950s he was one of the founders of Four Star Television along with Charles Boyer, David Niven, and Ida Lupino. Some popular films starring Powell include 42nd Street (1933), A Midsummer's Night Dream (1935), Christmas in July (1940), Pitfall (1948), and The Bad and the Beautiful (1952).

Ellen Drew (1914 -2003) was an American film actress. She was under contract with Paramount studios from 1938 to 1944. At Paramount she costarred with Bing Crosby, Fred MacMurray, and George Raft. After leaving Paramount, Drew went to RKO where she was the leading lady opposite Ronald Colman, William Holden, and Robert Preston. During the 1950s, with film roles drying, Drew turned to television where sh guest-starred on shows like Perry Mason and The Millionaire.

To join the discussion on May 9, 2022, at 6:30 p.m. Central Time, click here. Once you RSVP, you'll receive an invitation with a link to the meeting on Zoom. 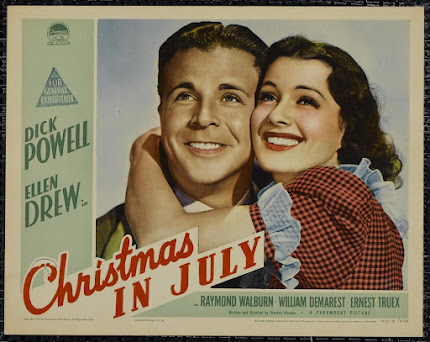