Here Comes Mr. Jordan (1941) is an American fantasy romantic comedy directed by Alexander Hall and starring Robert Montgomery, Claude Rains, and Evelyn Keyes. The screenplay was written by Sidney Buchman and Seton I. Segall and the cinematography was by Joseph Walker (It Happened One Night, It's a Wonderful Life).
Boxer and amateur pilot Joe Pendleton (Montgomery) while flying to his next bout in New York City. A severed control cable cause him to crash his plane. An overly conscientious Angel 7013 (Edward Everett Horton) retrieves his soul concluding that he couldn't survive the crash. Upon further examination, Angel 7013's superior Mr. Jordan (Raines) determined that Joe should have lived another 50 years.
To make amends, Mr. Jordan has Joe's soul enter the body of a crooked banker named Bruce Farnsworth who was murdered by his wife and his secretary.
Can Joe find happiness and resume his boxing career in the body of another man? 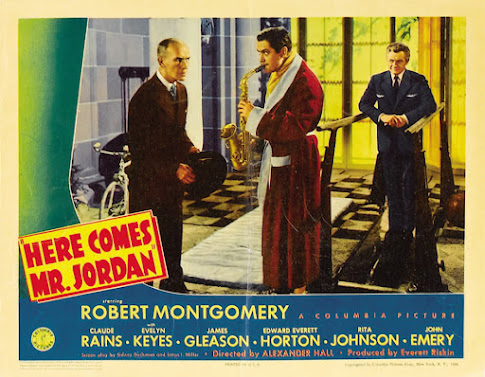 Alexander Hall (1894 - 1968) was an American film director. He was working on the stage at age four and continued acting. As an adult, he worked in silent film before becoming interested in film production. Hall worked as a film editor and assistant director until 1932. His first directed film was Sinners in the Sun. In 1937, he signed a contract with Columbia Pictures and worked there almost exclusively. He gained a reputation for directing sophisticated comedies. Some of the films he directed include Little Miss Marker (1934), My Sister Eileen (1942), They All Kissed the Bride (1942), Down to Earth (1947), and The Great Lover (1949).
Robert Montgomery (1904 - 1981) was an actor, director, and producer. Montgomery began his career on the stage but was soon signed by M-G-M becoming one of that studio's most popular leading men. The actor was adept at both dramas and comedies. Montgomery was twice nominated for the Best Actor Academy Award. In 1937, he was nominated for his performance as a murderous Irish handyman in Night Must Fall, and for his comedic performance in Here Comes Mr. Jordan (1942). While at M-G-M, he worked with all of the great leading ladies of the day including Norma Shearer, Joan Crawford, Ann Harding, and Greta Garbo. Before the United States entered World War II, Montgomery joined the American Field Services in London and drove ambulances in France. When the United States entered the war, he joined the Navy. He starred opposite Carole Lombard in Mr. & Mrs. Smith, They Were Expendable (1945), and two film noir classics The Lady in the Lake (1947) and Ride the Pink Horse (1947). From 1950 to 1957, he hosted the Emmy Award-winning series Robert Montgomery Presents. In 1955 he won a Tony Award for his direction of the play The Desperate Hours. He was also the father of actress Elizabeth Montgomery.
Claude Rains (1889 - 1967) was a British actor whose career lasted almost seven decades. He was one of the most highly regarded character actors during Hollywood's classical period. He appeared in a number of classic films including The Adventures of Robin Hood (1938), Mr. Smith Goes to Washington (1939), The Wolf Man (1941), Casablanca (1942), and King's Row (1942). Later in his career, he starred in Lawrence of Arabia (1962), and The Greatest Story Ever Told (1965). He starred in four films with Bette Davis including Now, Voyager (1942), and Mr. Skeffington (1944). Rains was a four-time Best Supporting Actor Academy Award nominee. Many of his contemporaries consider him one of the greatest actors of the 20th century.
To watch the film on YouTube, click on the link below.
Here Comes Mr. Jordan trivia
To join the discussion on May 2, 2022, at 6:30 p.m. Central Time, click here. When you RSVP, you will receive an invitation and Zoom link to the discussion.
Discussion questions:
Posted by Stephen Reginald at 12:29 PM