In 1929, author Edna Ferber (1885 – 1968) published a colossal bestseller about the settling of what would eventually become Oklahoma. Ferber, who grew up in Appleton, Wisconsin, saw first-hand the settling and development of the West. Her parents and grandparents moved west from New York before her birth and had many tales to tell about their journey. When Cimarron was first published in 1929, it was a hot property; all the Hollywood studios wanted to adapt Feber’s epic novel for the screen. RKO outbid its rivals and purchased the film rights to the novel for $125,000, a remarkable figure today, an enormous amount of money during the Great Depression.

Over 5000 Extras!
The film and novel begin with the Oklahoma Land Rush of 1889. To recreate this scene, RKO employed over 5,000 extras and 28 cameramen to capture all the action. The film had a then staggering $1.5 million budget. Cimarron was in production only three years after the introduction of talking pictures—barely 40 years after the real Land Rush—and it is a mix of acting techniques. Matinee idol Richard Dix’s performance is very theatrical and broad by today’s standards. However, when first released, The New York Times’s Mordaunt Hall praised the actor for his “fine impersonation of [Yancey] Cravat.” Irene Dunne, in only her second film, gives a more naturalistic performance as Dix’s wife Sabra. In the same review, Hall called Dunne’s performance “excellent.” The stars’ performances were good enough for both to earn nominations for Best Actor and Actress of 1931 come Oscar time. 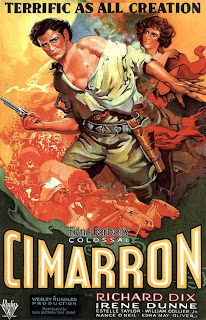 Ferber’s novels often featured strong female heroines who dealt with complicated issues like racism, prejudice, and discrimination. Cimarron was no exception. Ferber’s father was a Hungarian-born Jew, so she understood prejudice first-hand. In Cimarron, Ferber acknowledges the raw deal the Native Americans got, and the film version acknowledges this as well. Unfortunately, by today’s standards, many of the characterizations in the film are uncomfortable for today’s viewers, although they were perfectly acceptable, if not ground-breaking, for “a keenly interested audience” as Hall noted in his January 27, 1931 review.

Amazing Production
From a production standpoint, it still impresses. The opening Land Rush scene is a wonder. There seems to be little process photography, which is remarkable. Early sound pictures often suffered from lack of movement. Such is not the case with Cimarron. The camerawork seems fluid and natural, capturing all the action, which must have impressed moviegoers not used to seeing so much activity on the big screen.

Fictional Life of Temple Houston?
The Yancy Cravat character was supposedly modeled after Temple Houston, Sam Houston’s youngest child. Yancy is a flawed hero at best who abandons his wife and children for five years while he explores the Cherokee Strip. Yet, he has a sense of fairness, going so far as defending the notorious Dixie Lee, the towns most scandalous woman in court and protecting a Jewish peddler from the outlaw Lon Yountis and his gang. Yancy is also quick to accept his son’s romantic involvement with an Indian woman in contrast to Sabra who is slower to come around.

No Box Office Mojo
Although Cimarron was a critical success, due to its exorbitant cost and being released during one of the bleakest times during the Great Depression, it was years before RKO realized a profit. Cimarron was also the first western to win an Academy Award for Best Picture, a record it would hold until Dances With Wolves won the same award in 1991.

Part of Our History
Cimarron is a piece of our history. Not always pretty, but it gives us a frame of reference for where we’ve been, where we are today, and perhaps, how we need to move forward.

For a look at this film on the big screen, consider taking the course: ELEGANT AND MADCAP: The Incredible Versatility of Irene Dunne at Facets Film School, Wednesdays, 7-10pm, November 16 to December 21, 2011.

Posted by Stephen Reginald at 5:17 PM