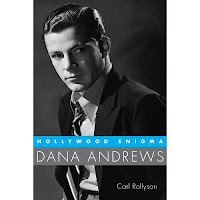 Dana Andrews was one of Hollywood’s biggest stars during the mid-1940s to early 1950s. A basically decent man, Andrews struggled with alcoholism for decades. His addiction affected his film career; other stars got roles that should have gone to him.

Carl Rollyson’s biography is comprehensive and fascinating. Rollyson obviously respects his subject, however, he is objective when it comes to some of the unattractive and disturbing incidents in Andrews’s life.

Andrews was born in Collins, Mississippi in 1904. His father, a Baptist minister, moved the family to Huntsville, Texas to accept a pastorate there. Somewhat rebellious, Andrews’s pursuit of an acting career was shunned by his strict parents. A talented singer, Andrews also studied opera. As soon as he was able, he moved to California to pursue his dream of acting success. He eventually became a regular performer at the famed Pasadena Playhouse where he met second wife, Mary Todd.

Hollywood eventually came calling and Andrews was signed by legendary independent filmmaker Samuel Goldwyn in 1938. After some small and supporting roles in films like the Ox-Box Incident, Andrews hit pay dirt as Lieutenant Mark McPherson in Laura, playing opposite Gene Tierney. A critical and financial success, Dana Andrews was now a full-fledged movie star. Success, and all the trappings that came with it, was tough for Andrews to handle. His drinking started to get in the way of his career and personal life. Amazingly, for the years he was a major star, his drinking rarely affected his on-screen work.

Andrews worked with major directors like John Ford, Otto Preminger, Fritz Lang, William Wyler, and Lewis Milestone. If it weren’t for his drinking, Andrews may have starred in the classic films Gentlemen’s Agreement and Twelve O’Clock High, both going to Gregory Peck. He finally conquered his demons late in life and was able to enjoy acting on the stage with his wife. A family man at heart, Andrews loved his wife and family passionately, if not perfectly. Apart from learning a lot about Andrews the man and actor, the reader comes away with an understanding of what the life of a movie star was like under the studio system. As you might imagine, it wasn’t as glamorous as we were led to believe. Rollyson’s work is respectful and objective, painting a rich portrait of one of Hollywood’s most beloved  movie stars.

Rollyson is a professor of journalism at Baruch College, CUNY. He is the author of more than thirty books, including the forthcoming American Isis: The Life and Death of Sylvia Plath and biographies of Marilyn Monroe, Lillian Hellman, Martha Gelhorn, Norman Mailer, Rebecca West, and Susan Sontag. He is the advisory editor of the Hollywood Legends Series. 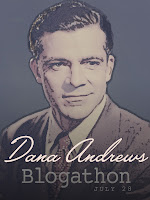 Take a look at the Dana Andrews blogathon posts to learn more about the actor and his most famous movie roles by clicking here.
Posted by Stephen Reginald at 8:09 PM