It’s become an annual feature on this blog to write about my favorite classic Christmas movies. In the movies, the Christmas season can be portrayed as incredibly sentimental, sad or tragic. Here are a few classics that use the holiday as a backdrop to the overall narrative. This list includes some of my favorite movies, featuring some of Hollywood’s legendary stars—like they don’t make any more. Enjoy! 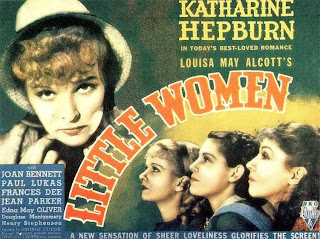 Little Women—1933 The definitive version of the Louisa May Alcott novel stars Katharine Hepburn and
Joan Bennett as Jo and Amy March respectively. Set during and after the American Civil War, the story centers around the March sisters and their mother, Marmee. Their lives are turned upside down while Mr. March is away from home, fighting for the Union Army. Surviving without Mr. March is a challenge for Marmee and the girls who are beholden to their rich Aunt March, played by the always enjoyable, Edna May Oliver. During the Christmas season, the girls don’t receive much in the way of gifts, but they share a love and bond that make the spirit of the holiday rich and meaningful. A wonderful film to watch any time of the year, but it really glows around Christmas time. Little Women also features one of Hepburn’s best performances. Other standouts in the cast include, Bennett, Frances Dee as Meg, Jean Parker as the doomed Beth, Spring Byington as Marmee, and Paul Lukas as Professor Bhaer.

Backstory: Little Women has been remade several times for television and for theatrical release. After the 1933 version, the 1949 Little Women with June Allyson, Peter Lawford, Margaret O’Brien, Elizabeth Taylor, and Janet Leigh is worth watching too. Filmed in glorious M-G-M Technicolor, it looks like a Christmas postcard.


Stowaway—1936 This popular Shirley Temple vehicle was considered one of her best when released. Temple plays Barbara “Ching-Ching” Stewart, an orphan living in China. While in Shanghai, Ching-Ching becomes a stowaway on the same ship as Tommy Randall (Robert Young), a rich playboy traveling around the world by luxury liner. Also on board is Susan Parker (Alice Faye), the traveling companion to Mrs. Hope, the mother of Susan’s ex-fiance. Of course Tommy and Susan fall in love and adopt little Ching-Ching. Along the way there are some nice tunes for Temple and Fay to sing, including “Goodnight My Love” and “That’s What I Want for Christmas.” The latter is sung during the last few minutes of the movie as the new family celebrates the Christmas holiday together for the very first time. The song, along with the film, was enormously popular. As Temple movies go, this is one of my favorites. Young and Faye have a warm and realistic chemistry on screen and the film includes the wonderful Arthur Treacher, part of the “Shirley Temple Stock Company.” If you’ve never seen a Temple film before, this is a good one to watch as a primer.


In Name Only—1939 This movie melodramatic stars popular screwball comedy icons Carole Lombard and Cary Grant. Kay Francis also stars as Grant’s wife, more interested in money and position than love. Grant plays Alec Walker, a rich businessman from a well-respected family. Discouraged and despondent over his loveless marriage to Maida (Francis), Alec’s spirits are temporarily lifted when he runs into Julie Eden (Lombard) and her young daughter, Ellen (an unbilled Peggy Ann Garner). Julie is a widow and a commercial artist in New York City. Alec and Julie meet by accident, and develop a friendship that quickly turns into love. Julie realizing there is no future with a married man tries to break things off, but Alec is persistent. Maida has so manipulated Alec’s parents that they cannot see her deception. They take her side against their own son and look down their noses at Julie. When Maida refuses to give Alec a divorce, all seems lost. On Christmas Eve, Alec gets himself good and drunk and he ends up sick with pneumonia (thanks to sitting in front of an open window all night). In the hospital, Alec asks for Julie. Julie goes to be by his side, but is shunned by Alec’s parents and their family doctor. At the hospital, Julie confronts Maida. Maida reveals to Julie that she never loved Alec and that she’s holding out for the old man’s money, just as Mr. and Mrs. Walker enter the hospital room and hear their duplicitous daughter-in-law’s scheme. Alec’s parents finally wise to Maida declare that she won’t get a penny of their money. This event frees Alec and Julie to be together, enabling them to share a very Merry Christmas, even if it’s in a hospital room.

Backstory: Kay Francis was one of the biggest movie stars in the world in the early and mid 1930s. At the time this film was released, her career was on a downward spiral. Lombard who knew Francis from her Paramount contract days, offered Francis the plum role of Maida and gave her equal billing with herself and Cary Grant. The New York Times called the film “soap opera par excellence, blessed with a peerless cast.”


The Curse of the Cat People—1944 A Christmas movie you say? Yes, indeed! As a sequel to Cat People, it stands on its own merits as an original work of movie storytelling. The film concerns the story of Amy (Ann Carter), an introverted little girl who spends all her time daydreaming. She conjures up an imaginary friend Irena (Simone Simon), the late first wife of her father (Kent Smith), something that baffles her parents, since Irena’s name has never been mentioned in their house. Amy also befriends Mrs. Farren, (Julia Dean) an elderly woman who is estranged from her own daughter, Barbara (Elizabeth Russell) who is desperate for some emotional connection to her mother. During the Christmas holiday, Amy sees Irena in her backyard in a beautiful gown. As party guests inside Amy’s house are singing carols, Irena sings a carol to Amy in French. Shortly after this event, Irena tells Amy that she is leaving her and she won’t be visiting her again. Distraught by this news and her parents growing frustration with what to do, Amy runs away from home during a snowstorm. She ends up at the home of Mrs. Farren, hoping to find some comfort. She does for a moment until Mrs. Farren drops dead before her. Barbara approaches Amy with murder in her eyes, but suddenly melts when Amy, imagines that Barbara is Irena—calling her “my friend.” Instead of straggling the child, which is what we think is about to happen, Barbara returns the embrace that Amy gives her, her features and body language softening. The Curse of the Cat People is an interesting look at the imaginary life of a child and the parent-child relationship.

Backstory: This was the first film to be directed by Robert Wise (West Side Story, The Sound of Music) who took over for the original director, Gunther von Fritsch. The New York Time’s Bosley Crowther called the film “a rare departure from the ordinary run of horror films [which] emerges as an oddly touching study of the working of a sensitive child’s mind.”


Lady on a Train—1945 This interesting mix of film noir and screwball comedy stars a very blond Deanna Durbin as a young women on her way to New York during the Christmas holiday. Traveling to Grand Central Station, debutante Nikki Collins (Durbin) witnesses a murder from her train car window. When the police ignore her story as the tale of someone with an overactive imagination, Nikki solicits the help of mystery novelist Wayne Morgan (David Bruce). Nikki tries to figure out who killed Josiah Waring and why? She suspects Arnold Waring (Dan Duryea), but there’s something odd about Arnold’s cousin, Jonathan Waring (Ralph Bellamy). Of course Deanna gets to sing several songs, including “Give Me a Little Kiss,” and “Night and Day,” while she’s sleuthing. She sings the Christmas hymn “Silent Night” to her father (who is never seen) over the telephone. Durbin sings the carol, reclining on her hotel bed bathed in the most becoming movie star lighting imaginable. As the plot thickens and Nikki gets closer to the truth her own life is in peril. The movie features a supporting cast of film noir and screwball comedy pros, including the aforementioned Duryea and Bellamy, Edward Everett Horton, Elizabeth Patterson, and William Frawley. The film moves along at a clip and balances the serious with the comedy well. A treat for Durbin fans for sure, but it should also please fans of film noir and screwball comedies as well.

Backstory: Deanna Durbin married the French director, Charles David (her third husband). She abandoned her Hollywood career in 1948, married David in 1950 and together they relocated to France where she remained until her death in 2013.

There are so many great classic movies to watch during the holidays. The above are just a small sampling. For a list of some other classic Christmas movies, click on the links below.

Posted by Stephen Reginald at 7:27 AM

Email ThisBlogThis!Share to TwitterShare to FacebookShare to Pinterest
Labels: Christmas movies, Classic Movie Man, holiday classics, In Name Only, Lady on a Train, Little Women, Stowaway, The Curse of the Cat People