Of all the movies made about returning World War II veterans and their struggles, Apartment for Peggy (1948) probably isn’t the first one that comes to mind. Directed by George Seaton and released a year after his award winning holiday classic Miracle on 34th Street, Apartment for Peggy holds up remarkably well.

Jeanne Crain and William Holden play a young married couple trying to cope with the GI housing shortage after the war. The movie begins with Peggy (Crain), who appears to be very pregnant, taking a short rest on a park bench next to retired Professor Henry Barnes (Edmund Gwenn). Peggy takes an immediate liking to the old professor; she calls him “pops” and baffles him with her rapid-fire speech and modern slang. When she finds out that Barnes’s friend, Professor Bell, (Gene Lockhart) might have “suction” with veteran housing on campus, Peggy asks Barnes to please put in a good word for her.

Before you know it, Peggy and Jason are turning Professor Barnes’s attic into a very comfortable and functional living space. Even Professor Barnes is amazed at the transformation. Reluctant at first to this “home invasion,” Professor Barnes learns to enjoy sharing his home with the young couple, although living with Peggy can be challenging at times.

What Peggy and Jason don’t know, is that before they moved in, the professor was planning his own suicide. The university forced him to retire years earlier and Barnes thinks his usefulness has come to an end. His wife is deceased and his only son was killed in the First World War. He concludes that he’s lived a good, satisfying life and feels it’s time to exit on his own terms.

With all the veterans attending college, learning new things, the wives feel left out in the cold. Some think their husbands are drifting away. Peggy feels that it would be great if there was some way for the wives to get an overview of what their husbands are learning so they can grow together instead of apart. Peggy “volunteers” Professor Barnes for the job of organizing the instruction. At first he is annoyed with Peggy for saying he would take on such a task, after all, he has a suicide to arrange. But after a few classes with the wives, Barnes finds himself enjoying teaching like he never did before. He also discovers that he’s becoming involved in the lives of Peggy and Jason, something he never imagined.

At her baby shower, Peggy feels that something is wrong. She goes to the hospital where she miscarries, leaving Jason and Professor Barnes at a loss for words. Jason and the professor walk home from the hospital in silence, grief and disappointment etched on their faces. 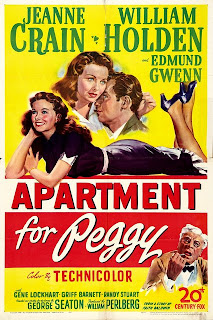 When Jason gets a job in Chicago as a used car salesman, things begin to fall apart for Peggy and Professor Barnes. Peggy’s dreams of having a chemistry-teacher husband evaporate like steam from a teakettle. And what’s worse, Peggy is convinced that Jason really wants to be a professor, but thinks that he should be earning more money to provide for his wife.

Peggy reluctantly announces that she’s moving out to be with Jason in Chicago. Once again, Professor Barnes feels that he has no useful purpose in life. In his despair, he takes an overdose of sleeping pills. When Peggy finds out what he’s done, she forces black coffee down his throat and makes him walk around the house to stay awake. When Jason arrives on the scene and finds out what the professor has done, he gives him a tough-love speech. The speech is effective enough that Professor Barnes decides he really wants to live. In the end, Jason decides that he wants to be a chemistry teacher in spite of it all.

Seaton demonstrates his ability to portray characters that are true to life. The interactions between Crain, Gwenn, and Holden seem natural, not forced. Seaton manages to inspire the audience without being corny or overly sentimental. He also gets wonderful performances from the three stars, but Crain really shines as Peggy. The success of the movie rests on her shoulders. If you don’t care about Peggy, the movie falls apart. New York Times movie critic, Bosley Crowther thought Appartment for Peggy was a better movie than Miracle on 34th Street. Crowther also noted that Crain’s “vivid characterization” as Peggy contributed to the film’s overall success.

Through Seaton’s writing and direction, we see how liberating education, and not just the book kind, can be. The enthusiasm the wives show in Professor Barnes’s philosophy class is inspiring; the joy of learning is obvious and contagious. And what about the joy the instructor expresses? Seaton makes it clear there is wisdom in old age and it should be respected and appreciated, not thrown away or pushed aside.

Apartment for Peggy is a time capsule of what life was like (including the colorful slang of the day) during post-World War II America. It’s funny without being overly cute. It’s sad without being depressing. Seaton manages to capture the entire human experience in a wonderfully entertaining package. It’s a neglected classic that needs to be given its due.


Backstory: Apartment for Peggy was the first movie to actually portray a pregnant woman on screen with a large belly! Prior to this film, women were not pictured on screen in the “family way.”

Apartment for Peggy is available on DVD as part of Twentieth Century Fox’s Cinema Archives releases. The Technicolor Print is adequate, with interior scenes appearing on the dark side and with little contrast. The sound is perfect, but as with all of the on-demand Cinema Archives editions, it has no extras. It’s unfortunate that Fox didn’t think this film was worthy of a restoration with extras, considering the talent involved. It really deserves a better presentation on video.

Posted by Stephen Reginald at 5:22 PM