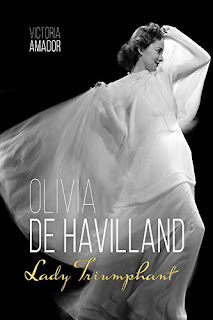 For many young women, being under contract to a major studio, earning a good salary, and working with leading men like Errol Flynn would be exciting enough. Being the "girl" in pictures wasn't de Havilland's idea of a career. She wanted to be taken seriously as an actress; she wanted the career that fellow Warner Brothers colleague Bette Davis had.

Jack Warner never considered de Havilland as anything more than a pretty girl to co-star with leading men like Flynn. As much as she enjoyed working with Flynn (admitting to being in love with him for a time), she wanted more challenging roles than looking pretty in beautiful clothes and period costumes. But de Havilland's beautiful face and charming demeanor hid a strong ambition and a willingness to take risks with her career.

To get the role of Melanie Hamilton in Gone with the Wind, the biggest movie production of the century, de Havilland appealed to Jack Warner's wife. She got the role, an Oscar nomination, and screen immortality. But that wasn't enough for de Havilland; she wanted better roles.

When presented with inferior scripts, de Havilland refused them. This put her on suspension and at odds with Warner. During the studio era, when an actor or actress refused a role assigned to them, they were put on suspension which meant they went without pay until the film they refused to do was completed. The studios would add the time spent on suspension to their contract, would keep a performer under contract indefinitely. When she thought her seven-year contract was up, Warner Brothers told her she owed them another six months work. This didn't sit well with de Havilland and at peril she decided to take the studio to court.

The court decided that contracts could not last past their calendar date, thus siding with the actress in what became known as the "de Havilland decision." That decision was the beginning of the end to the Hollywood studio system. After leaving Warner Brothers, de Havilland went on to win two Best Actress Academy Awards for To Each His Own (1946) and The Heiress (1949).

If you're a classic movie fan, you probably know a lot of the details of de Havilland's career. However, the author has written an engaging biography/memoir that includes her relationship and friendship with the legendary actress, giving us a glipse at her life in Paris in her latter years.

Posted by Stephen Reginald at 2:05 PM