It’s Christmastime again. And it’s time for some more classic Christmas films to enjoy during the holidays. Some of these films you might not associate with Christmas, but all feature the holiday prominently. Make some hot chocolate, light up the fireplace and get cozy on the couch or your favorite chair to watch some great classic movies! 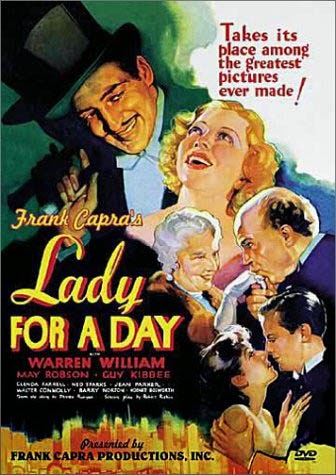 Lady for a Day—1933 This early Frank Capra classic (released a year before It Happened One Night) is about Apple Annie (May Robson), a poor woman who sells fruit on the streets of New York City to support her daughter’s education in a Spanish convent school. Her daughter is coming to visit her mother, who she thinks is a society lady. Annie needs a Christmas miracle to keep up the charade when her daughter arrives with her fiancé Carlos and his father, Count Romero. Will Annie’s street friends and gambler Dave the Dude (Warren William) come to her aid? What do you think? It’s great classic entertainment from one of Hollywood’s great masters.

Backstory: Capra wanted Robert Montgomery (it was written with Montgomery in mind), James Cagney or William Powell to star as Dave the Dude and Marie Dressler to star as Annie, but their respective studios wouldn’t loan them out.

The Thin Man—1934 The first of the classic films featuring Nick and Nora Charles (William Powell and Myrna Loy) includes several scenes during the Christmas holiday. Nick, a former detective and Nora, his rich wife, solve murders for the fun of it. The film combines comedy, mystery, and slapstick (check out Myrna Loy’s terrific pratfall at the beginning of the movie). The Thin Man basically invented the comedy murder-mystery genre. It’s fast and furious, featuring some of the best dialogue of all time. Nora utters my favorite: “Waiter, will you serve the nuts? I mean, will you serve the guests the nuts?”

Backstory: The very efficient W. S. Van Dyke reportedly shot the film in only two weeks. The Thin Man was the first of six movies featuring the sleuthing Nick and Nora Charles, all starring Powell and Loy. 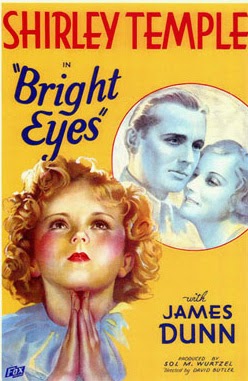 Bright Eyes—1934 This was the first film developed for Shirley Temple. Temple is Shirley Blake who lives with her mother Mary, (Lois Wilson) a maid in the house of the Smythe family. When she becomes an orphan on Christmas morning, Shirley’s future is uncertain. Her bachelor godfather and pilot, James “Loop” Merritt (James Dunn) would like to adopt the orphan, but wheelchair-bound Uncle Ned Smythe (Charles Sellon) wants Shirley to live with him. His snooty relatives, Anita and J. Wellington Smythe and their obnoxious daughter Joy (Jane Withers) reluctantly agree to his wishes, hoping to stay in his good graces financially. This is the film that features the song “On The Good Ship Lollipop,” a tune forever identified with Temple. Bright Eyes established Temple as a top box office star. Temple would continue to be a major fan favorite throughout the 1930s.

Backstory: Temple won a special juvenile Academy Award in 1935, the first year it was presented, for her work in Bright Eyes and Little Miss Marker. Shirley’s dog, Rags (Terry) was the same dog that played Totto in The Wizard of Oz.

Love Affair—1939 One of the great films from that amazing year stars Irene Dunne as singer Terry McKay and Charles Boyer as painter and playboy Michel Marnet. The two, both engaged to other people, meet on a trans-Atlantic liner and fall in love. Terry and Michel decide to meet at the top of the Empire State Building (the closest place to heaven) six months later. When the date arrives, Terry is hit by a car crossing the street and is badly injured. It is uncertain if she will ever be able to walk. Not wanting to gain Michel’s sympathy or be a burden, Terry refuses to contact him and tell him the reason she didn’t’ show up. The two accidentally meet at a theater, but it isn’t obvious to Michel that Terry cannot walk. Michel visits Terry on Christmas, gifting her with his mother’s shawl, something Terry had admired when she met the old woman who is now deceased. Michel finds out about Terry’s injury, but decides it doesn’t matter; they will be together whatever the diagnosis. 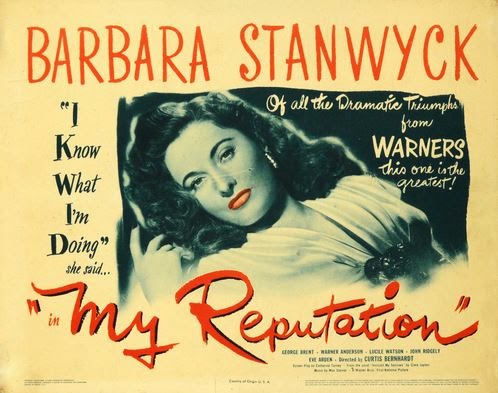 My Reputation—1946 Barbara Stanwyck plays Jessica Drummond, a young widow and mother of two sons from Chicago’s North Shore. Jess is mourning the loss of her husband as well as attempting to navigate the demands of being an upper class society woman. Her mother, Mary (Lucille Watson) is no help at all. She’s shocked when her daughter refuses to dress in black and makes Jess feel guilty for not following her example—Mary, a widow herself has been wearing black for decades. Fortunately for Jess, she has a great friend in Gina Abbott (Eve Arden) whom she confides in. Gina invites Jess to spend a week at Lake Tahoe with her husband. While skiing she meets Major Scott Landis (George Brent) who takes an immediate interest in her. Jess likes Scott and enjoys his company, but is reluctant to get too involved. The plot thickens when a friend of Jess’s mother sees her enter Scott’s apartment. It doesn’t take long for the society gang to spread rumors about Jess and her reputation, now seemingly tarnished. When Jess’s boys Kim (Scotty Beckett) and Keith (Bobby Cooper) come home from a Christmas party after hearing the gossip about their mother, things take an interesting turn. Stanwyck gives a subtle and sensitive performance as Jess and is ably supported by Brent and the rest of the cast. My Reputation is so well done and it’s a wonderful film to watch during the holidays.

Backstory: Made in 1944, the movie wasn’t released until 1946. The movie premiered in England to the Armed Forces. My Reputation was the first movie since the production code—enforced in 1934—to feature a double bed in a married couple’s bedroom.


In the Good Old Summertime—1949 Don’t let the title fool you! This musical remake of the Ernst Lubitsch classic, The Shop Around the Corner has several critical scenes that take place during the Christmas holidays and features the song “Merry Christmas.” Veronica Fisher (Judy Garland) and Andrew Larking (Van Johnson) are battling coworkers in a music store owned by Otto Oberkugen (S.Z. Sakall). Unbeknownst to Veronica and Andrew is the fact that they are each other’s secret pen pal. Garland is absolutely charming as Veronica and Johnson is perfect as Andrew. The supporting cast is a film buff’s delight that features the talents of Sakall, Spring Byington, Clinton Sundberg, and Buster Keaton, making his first film at M-G-M since being fired from the studio in 1933.

Backstory: Judy Garland replaced June Alyson who had to drop out of the movie due to pregnancy. Liza Minnelli made her film debut as the child of Veronica and Andrew in the closing shot. Room for One More—1952 This heartwarming family film was a favorite of my family, especially around Christmastime. The movie stars Cary Grant and Betsy Drake (who were married at the time) as George “Poppy” and Anna Rose, a middle-class family who foster children who eventually become permanent members of their family. Anna is the softy of the two, or so it seems. The Roses have three children of their own, but after visiting an orphanage, Anna feels compelled to help at least one child. Poppy who is reluctant and grumpy about his wife’s willingness to bring strange children into their home, eventually warms up to the idea. Room for One More is a wonderfully entertaining film that demonstrates the importance of family, love, forgiveness, and reconciliation.

Backstory: The words “under God” are missing from the Pledge of Allegiance the schoolchildren recite because they weren’t added until 1954.

What do you think these of these choices? I would love to hear from you. Merry Christmas!


There are so many great classic movies to watch during the holidays. The above are just a small sampling. For a list of some other classic Christmas movies, click on the links below.