The Dark Mirror (1946) is an American film noir directed by Robert Siodmak, and starring Olivia de Havilland, Lew Ayres, and Thomas Mitchell. The film was written and produced by Nunnally Johnson. Milton Krasner worked as the cinematographer and Dimitri Tiomkin wrote the film’s score. 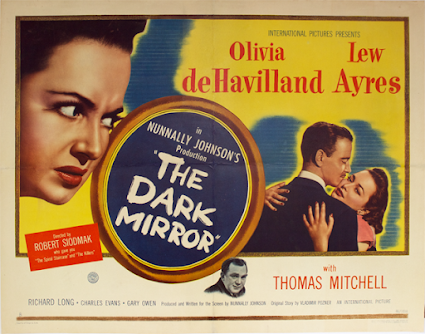 Identical twin sisters Ruth and Terry Collins (de Havilland in a dual role) are almost impossible to tell apart. After Terry visits the apartment of Dr. Frank Peralta, he is found stabbed to death. Detective Lt. Stevenson (Mitchell) suspects Terry, but she has witnesses that can vouch for her whereabouts the evening of the murder. When Stevenson discovers that Terry has an identical twin sister Ruth, identifying the murderous sister becomes more complicated.

Nunnally Johnson (1897 – 1977) was a journalist, screenwriter, producer, and director. He worked for many years as a writer at 20th Century-Fox before he co-founded International Pictures in 1943 with William Goetz. Johnson was nominated for an Academy Award for Best Screenplay in 1940 for The Grapes of Wrath. Johnson wrote, produced, and directed The Man in the Gray Flannel Suit (1956) and The Three Faces of Eve (1957). As a writer-producer, he is responsible for The Gunfighter (1950), My Cousin Rachel (1952), and How to Marry a Millionaire (1953). Johnson’s last credited screenplay was for The Dirty Dozen (1967).

Olivia de Havilland (1916 – 2020) was a British-American actress and two-time Best Actress Academy Award winner. De Havilland’s career spanned more than five decades. She was one of the leading actresses of the 1940s and was the last major surviving star from Hollywood’s Golden Age. Some of de Havilland’s classic films include The Adventures of Robin Hood (1938), Gone with the Wind (1939), Hold Back the Dawn (1941), To Each His Own (1946), The Snake Pit (1948), and The Heiress (1949).

Lew Ayres (1908 – 1996) was an American actor who had a long career in film and television. He is perhaps best known for portraying a German soldier in the film All Quiet on the Western Front (1930) and for portraying Dr. Kildare in nine movies. Ayres was a conscientious objector during World War II. This almost destroyed his career and reputation until it was revealed that he served as a non-combatant medic from 1942 to 1946. The Dark Mirror (1946) was Ayres’ first movie role after the war. In 1948 he was nominated for an Academy Award for Best Actor in the film Johnny Belinda (1948). Ayres was married to Ginger Rogers from 1934 until 1940.

Thomas Mitchell (1892 –1962) was an American character actor who had a long career in film and the theater. Mitchell was one of the most recognizable character actors in movies during the 1930s and 1940s. In 1939, Mitchell had important roles in five classic films: Stagecoach, Only Angles have Wings, Mr. Smith Goes to Washington, Gone with the Wind, and The Hunchback of Notre Dame. Mitchell won a Best Supporting Actor Academy Award for his role as Doc Josiah Boone in Stagecoach.

After you watch the film, join us for a discussion on Zoom, November 17, 2020, at 6:30 p.m. Central Time. Click here for information on Zoom links and invitation.

Posted by Stephen Reginald at 5:47 PM